Home > All Reminiscences of John Muir > 31 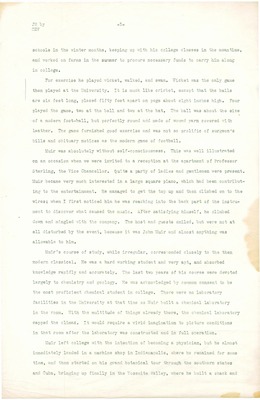 JM by CSV • 5- schools in the winter months, keeping up with his college classes in the meantime, and worked on farms in the summer to procure necessary funds to carry him along in college. For exercise he played wicket, walked, and swam, wicket was the only game then played at the University. It is much like cricket, except that the bails are six feet long, placed fifty feet apart on pegs about eight inches high. Four played the game, two at the ball and two at the bat. The ball was about the size of a modern foot-ball, but perfectly round arid made of wound vara covered with leather. The game furnished good exercise and was not so prolific of surgeon's bills and obituary notices as the modern game of football, Muir was absolutely without self-consciousness. This was well illustrated on an occasion 'ffhen we were invited to a reception at the apartment of Professor Sterling, the Vice Chancellor. Quite a party of ladies and gentlemen were present. Muir became very much interested in a large square piano, which had been contributing to the entertainment. He managed to get the top up and then climbed on to the wires; when I first noticed him he was reaching into the back part of the instrument to discover what caused the music. After satisfying himself, he climbed down and mingled with the company. The host and guests smiled, but were not at all disturbed by the event, because it was John Muir and almost anything was allowable to him. Mulr's course of study, while irregular, corresponded closely to the then modern classical. He was a hard working student and very apt, and absorbed knowledge rapidly and accurately. The last two years of his course were devoted largely to chemistry and geology. He was acknowledged by common consent to be the most proficient chemical student in college. There were no laboratory facilities in the University at that time so Muir built a chemical laboratory in the room. With the multitude of things already there, the chemical laboratory capped the climax. It would require a vivid imagination to picture conditions in that room after the laboratory was constructed and in full operation. Muir left college with the intention of becoming a physician, but he almost immediately landed in a machine shop in Indianapolis, where he remained for some time, and then started on his grand botanical tour through the southern states and Cuba, bringing up finally in the Yosemite Valley, where he built a shack and