Home > All Reminiscences of John Muir > 29 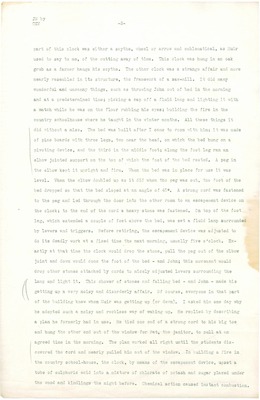 by CEV -3- part of this clock was either a scythe, wheel or arrow and emblematical, as Muir used to say to me, of the cutting away of time. This clock was hung in an oak grub as a farmer hangs his scythe. The other clock was a strange affair and more nearly resembled in its structure, the framework of a saw-mill. It did many wonderful and uncanny things, such as throwing John out of bed in the morning and at a predetermined time; picking a cap off a fluid lamp and lighting it with a match while he was on the floor rubbing his eyes; building the fire In the country schoolhouse where he taught in the winter months. All these things it did without a miss. The bed was built after I came to room with him; it was made of pine boards with three legs, two near the head, on which the bed hung on a pivoting device, and the third In the middle foot; along the foot leg ran an I elbow jointed support on the top of whieh the foot of the bed rested, A peg in -. ] the elbow kept it upright and firm. When the bed was in place for use It was level. When the elbow doubled up as It did when the peg was out, the foot of the bed dropped so that the bed sloped at an angle of 45°, A strong cord was fastened to the peg and led through the door into the other room to an escapement device on the clock; to the end of the cord a heavy stone was fastened, Cn top of the foot leg, which extended a couple of feet above the bed, was set a fluid lamp surrounded by levers and triggers. Before retiring, the escapement device was adjusted to do its deadly work at a fixed time the next morning, usually five o'clock. Exactly at that time the clock would drop the stone, pull the peg out of the elbow joint and down would come the foot of the bed - and John; this movement would drop other stones attached by cords to nicely adjusted levers surrounding the lamp and light it. This shower of stones and falling bed - and John - made his getting up a very noisy and disorderly affair. Of course, everyone in that part of the building knew when Muir was getting up (or down), I asked him one day why he adopted such a noisy and reckless way of waking up. He replied by describing a plan he formerly had In use. He tied one end of a strong cord to his big toe and hung the other end out of the window for pat, the janitor, to pull at an | agreed time in the morning. The plan worked all right until the students discovered the cord and nearly pulled him out of the window. In building a fire in < the country school-house, the clock, by means of the escapement device, upset a tube of sulphuric acid Into a mixture of chlorate of potash and sugar placed under the wood and kindlings the night before. Chemical action caused instant combustion.