Home > All Reminiscences of John Muir > 28 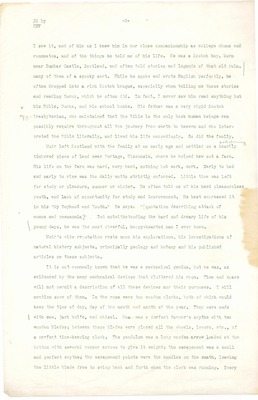 JM by -2- CEV I saw it, and of him as I knew him in our close companionship as college chums and roommates, and of the thing's he told me of his life. He was a Scotch boy, born near Dunbar Castle, Scotland, and often told stories and legends of that old ruin, many of them of a spooky sort. While he spoke and wrote English perfectly, he often dropped into a rich Scotch brogue, especially when telling me these stories and reading Burns, which he often did. In fact, I never saw him read anything but v his Bible, Burns, and his school books. His father was a very rigid Scotch CY Dresbyterian, who maintained that the Bible is the only book human beings can possibly require throughout all the journey from earth to heaven and who interpreted the Bible literally, and lived his life accordingly. So did the family. Muir left Scotland with the family at an early age and settled on a heavily timbered piece of land near ^ortage, Wisconsin, where he helped hew out a farm. His life on the farm was hard, very hard, nothing but work, work. Early to bed and early to rise was the daily motto strictly enforced. Little time was left for study or pleasure, summer or winter. He often told me of his hard pleasureless youth, and lack of opportunity for study and improvement. He best expressed it in his "My Boyhood and Youth." He says: "[quotation describing attack of mumps and pneumonia]" , But notwithstanding the hard and dreary life of his young days, he was the most cheerful, happy-hearted man I ever knew. Lr'a ~'_2a refutation rests upon his explorations, his investigations of natural history subjects, principally geology and botany and his published articles on these subjects. It is net commonly known that he was a mechanical genius, but he was, as evidenced by the many mechanical devices that cluttered his room. Time and space will not permit a description of all these devices nor their purposes, I will mention some of them. In the room were two wooden clocks, both of which would keep the time of day, day of the month and month of the year. They were made | with saw, jack knife, and chisel. One- was a perfect farmer's scythe with two wooden blades; between these blades were pieced all the wheels, levers, etc,, of a perfect time-keeping clock. The pendulum was a long wooden arrow loaded at the Lth several copper arrows to give it .. ' '..; the escapement was a small and perfect scythe; the escapement points were the handles on the snath, leaving the little blade free to swing back and.forth when the clock was running. Every