Home > All Reminiscences of John Muir > 25 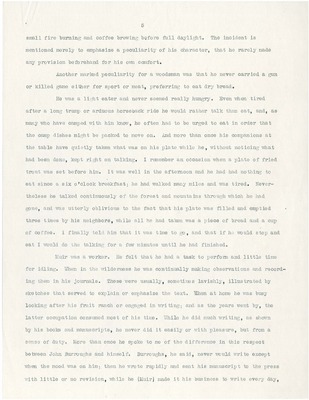 5 small fire burning and coffee brewing before full daylight. The incident is mentioned merely to emphasize a peculiarity of his character, that he rarely made any provision beforehand for his own comfort. Another marked peculiarity for a woodsman v/as that he never carried a gun or killed game either for sport or meat, preferring to eat dry bread. He v/as a light eater and never seemed really hungry. Even when tired after a long tramp or arduous horseback ride he would rather talk than eat, and, as many who have camped with him know, he often had to be urged to eat in order that the camp dishes might be packed to move on. And more than once his companions at the table have quietly taken what was on his plate while he, without noticing what had been done, kept right on talking, I remember an occasion v/hen a plate of fried trout was set before him. It was well in the afternoon and he had had nothing to eat since a six o'clock breakfast; he had walked many miles and was tired. Nevertheless he talked continuously of the forest and mountains through v/hich he had gone, and was utterly oblivious to the fact that his plate v/as filled and emptied three times by his neighbors, while all he had taken was a piece of bread and a cup of coffee. I finally told him that it was time to go, and that if ho would stop and eat I would do the talking for a few minutes until he had finished. Muir v/as a worker. He felt that he had a task to perform and little time for idling. When in the wilderness he was continually making observations and recording them in his journals. These were usually, sometimes lavishly, illustrated by sketches that served to explain or emphasize the text. ^Shen at home he was busy looking after his fruit ranch or engaged in writing; and as the years went by, the latter occupation consumed most of his time. While he did much writing, as shown by his books and manuscripts, he never did it easily or with pleasure, but from a sense of duty. More than once he spoke to me of the difference in this respect between John Burroughs and himself. Burroughs, he said, never would write except v/hen the mood was on him; then he wrote rapidly and sent his manuscript to the press with little or no revision, while he (Muir) made it his business to write erery day,