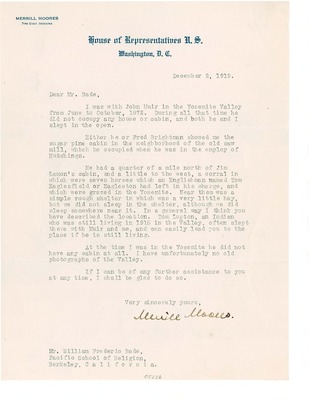 MERRILL MOORES House of Representatives U. S. December 2, 1919. Dear Mr, Bade, I was with John Muir in the Yosemite Valley from June to October, 1872. During all that time he did not occupy any house or cabin, and both he and I slept in the open. Either he or Fred Brightman showed me the sugar pine cabin in the neighborhood of the old saw mill, which he occupied when he was in the employ of Hutchings. He had a quarter of a mile north of Jim Lamon's cabin, and a little to the west, a corral in which were seven horses which an Englishman named Tom Eaglesfield or Eagleston had left in his charge, and which were grazed in the Yosemite. Near them was a simple rough shelter in which was a very little hay, but we did not sleep in the shelter, although we did sleep somewhere near it. In a general way I think you have described the location. Tom Lupton, an Indian who was still living in 1915 in the Valley, often slept there with Muir and me, and can easily load you to the place if he is still living. At the time I was in the Yosemite he did not have any cabin at all. I have unfortunately no old photographs of the Valley. If I can be of any further assistance to you at any time, I shall be glad to do so. Very sincerely yours, Mr, William Frederic Bade, Pacific School of Religion, Berkeley, California