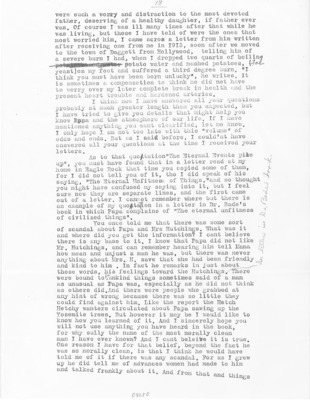 J8. were such a wottry and distraction to the most devoted father, deserving of a healthy daughter, if father ever was. Of course I was ill many times after that while he was living, but those I have told of were the ones that most worried him. I came acroa a letter from him written after receiving one from me in 1913, soon after we moved to the town of Daggett from Hollywood, telling him of a severe burn I had, when I dropped two quarts of boilin -^^S^jPMiBfiaK^^MPfeBfl?-potato water and mashed potatoes, (-n*- yeast)on my foot and suffered a third degree burn. "I think you must have been born unlucky", he writes. It is sometimes a compensation to think he did not have to worry over my later complete break in health and the present heart trouble and hardened arteries. I think now I nave answered all your questions probably at much greater length than you expected, but I have tried to give you details that might help you know Bppa and the atmosphere of our life. If I have mentioned-anything you want clearified, let me know. I only hope I. am not too late with this "volume" of odds and ends. But as I aaifl before, I could'nt have answered all your questions at the time I received your letters. As to that quo^tation"The Sternal Events pile up", you must have found that in a letter read at my home in Eagle Rock that time you copied some of them, for I did not tell you of it, tho I did'speak of his saying, "The Sternal Unfitness of Things, "and so thought you might have confused my saying into it, but I feel sure now they are separate lines, and the first came out of a letter, I cannot remember where but there is an example of my quo|,tajlon in a letter in Dr. Bade's book in which Papa complains of "The eternal unfitness of civilized things". "^ You once told me that there was some sort $ of scandal about Papa and Mrs Hatchings, What was it and where did you get the information? I cant believe there is any base to it. I know that Papa did not like Mr. Hutchings, and can remember hearing him tell Mama nj how mean and unjust a man he was, but there was never anything about Mrs. H. save that she had been friendly^ and kind to him . In fact he remarks in just about those words, his feelings toward the Hutchings.. There were bound to^unkind things sometimes said of a man as unusual as Papa was, especially as he did not think as others did..And there were people who grabbed at any hint of wrong because there was so little they could find against him. Like the report the Hetch Hetchy wanters circulated about Papa sawing up the Yosemite trees. But however it may be I would like to know how you learned of it. And I sincerely hope you will not use anything you have heard in the book, for why sully the name of the most morally clean man I have ever known? And I cant beleifte it is true One reason I have for that belief, beyond the fact he was so morally clean, is that I think he would have told me of it if there was any scandal. For as I grew up he did tell me of advances women had made to him and talKea frankly eiout lt, And from ^ ^ ^^