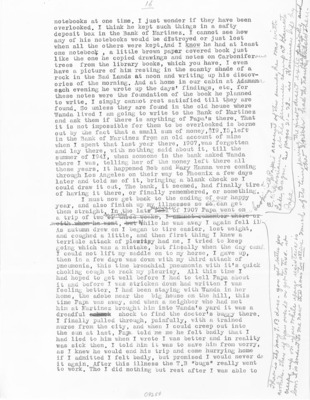 u notebooks at one time. I just wonder if they have "been overlooked. I think he kept such things in a safty deposit toox in the Bank of Martinez. I cannot see how any of his notebooks would toe destroyed or just lost when all the others were kept.And I know he had at least one notebook , a little torown paper covered toook just like the one he copied drawings and notes on Cartoonifer: trees from the litorary "books, which you have. I even have a picture of him resting in the scanty shade of a rock in the Bad Lands at noon and writing up his discov- ories of the morning. And at home in our catoin at Adamant each evening he wrote up the days' findings, etc. for these notes were the foundation of the toook he planned to v/rite. I simply cannot rest satisfied till they are found. So unless they are found in the old house where Wanda lived I am going to write to the Bank of Martinez and ask them if there is anything of Papa's there. That it is not impossitole for them to toe overlooked is toorne out by the fact that a small sum of money,$19,15,left' in the Bank of Martinez from an old account of mine * there, i907,was forgotten when I spent that last year and lay there, with nothing said atoout it summer of I941, when someone in the bank where I was those years, till the isked Wanda telling her of the money left there all It happened Boto and Mary Hanna were coming through Los Angeles on their way to Phoenix a few days later and told me of it, bringing a blank check so • could draw it out. The bank, it seemed, h of having it there, or finally remembered I must now get back to the ending of our happy year, and also finish up mv illnesses so sh. can get U-UO U-tV to U X .ad finally tire4/)*^ ., or something. -~A? x late^fcS&^f them straight. In .the a trip of two^e'$>:^^i4e=^e©S-e-, „u o.;L4h^wiaa»^he^^e«t, -Ss-ertr "while he was away As autumn drew, on I "began to tire easier and coughed a little, and then first 1907 Papa went on ©*- -wh®*e"-ox- I again fell 11/ lost wei I knew a thing terriole attack of plerar&sy had me. I tried to keep going which was a mistake, tout fin^ally when the day I could not lift my saddle on to my horse, I gave up, then in a few days was down with my third attack of pneumonia, this time "bronchial pneumonia with it's quick choking cough to rack my pleurisy. All this time I had hoped to get well "before I had to tell Papa about it and before I was stricken down had written I was feeling "better. I had "been staying with Wanda in her n, home, the time Papa him at Martinez dreadful ir the toig house on the hill, this adotoe ne; was away, and when a neighbor who had met "brought him into Wanda's shock to find the yara l o v/as a buggy there. I finally pulled through, painfully, with a trained nurse from the city, and when I could creep out into the sun at last, Papa, told me me he felt "badly that I had lied to him when I wrote I was better and in reality- was sick then. I told him it was to save him from worry, as I knew he would end his trip and come hurrying home if I admitted I felt badly, tout promised I would never d it again. After this illness the T.B "bugs" really went to work. Tho I did nothing but rest after I was able to ^ 5", '. W ; P>? A <