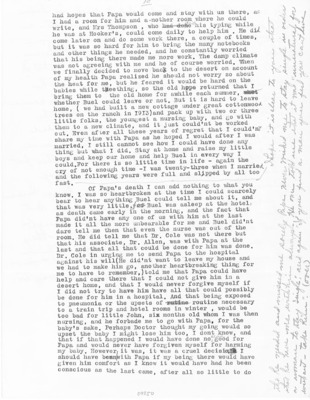 /. ' had hopes that Papa would come and stay with us there, as I had a room for him and aAnother room.where he could write, and Mrs Thompson , who hssfl-«efrone**his typing while he was at Hooker's, could come daily to help him . He dJW. come later on and do some work there, a couple of times, but it was so hard for him to bring the many notebooks and other things he needed, and he constantly worried that his being there made me more work. The damp climate was not agreeing with me and he of course worried. When we finally decided to move back, to the desert on account of my health Papa realized he should not worry so about the heat for me, tout he feared it would be hard on the babies while tjtee thing, so the old hppe returned that I bring them to the old home for awhile each summer, whether Buel could leave or not. But it is hard to home, ( we had "built a new cottage under great cottonwool trees on the ranch in I9l3)and pack up with two or three little folks, the youngest a nursing baby, and go with them to a new climate, and it just could'nt toe worked out. Even after all these years of regret that I could'nT share my time with Papa as he hoped I would after I was married, I still cannot see how I could have done any thing tout what I did. Stay at home and raise my little le ave S t: and help Buel in every way I the boys and keep our home could.Eor there is so little time in life ■• again cry of not enough time -I was twenty-three when I married and the following years were full and slipped toy all fast. Of Papa's death I can add nothing to what you know. I was so heartbroken at the time I could scarcely bear to hear anything Buel could tell me about it, and that was very little,£&&Buel was asleep at the hotel; as death came early in the morning, and the fact that Papa did'nt have any one of us with him at the last made it all the more untoearatole for me and Buel did'nt dare tell me then that even the nurse was out of the room. He did tell me that Dr. Cole was not there tout that his associate, Dr. Allen, was with Papa at the last and that all that could toe done for him was done. Dr. Cole in urging me to send Papa to the hospital against his will(He did'nt want to leave my house and we had to make him go, another hearttoreaking thing for me to have to remember,)told me that Papa could have help and care there that I could not give him in a desert home, and that I would never forgive myself if I did not try to have him have all that could possibly toe done for him in a hospital. And that toeing exposed to pneumonia or the upsets of -asattne routine necessary to a train trip and hotel rooms in winter , would be too bad for little John, sis months old whom I was then nursing, and he forbade me to go with Papa, for the toatoy's sake. Perhaps Doctor thought my going would so upset the baby I might lose him too, I dont know, and that if that happened I would have done nonfood for Papa and would never have forgiven myself for harming my baby However, it was, it was a cruel decisional I should have toeanfwith Papa if my toeing there would have given him comfort as I know it would have had he "been conscious as the last came, after all so little to do * ; -:■■ OT2fO