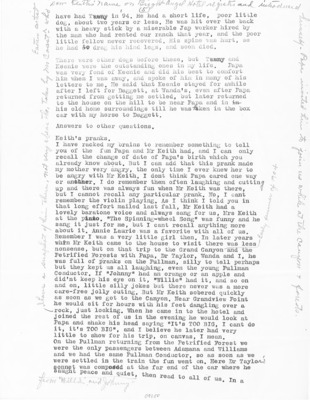 \i^ "V have had Twmy in 94. he had a short life, poor little <* dog, atoout two years or less. He was hit over the back ^ with a heavy stick toy a miserable Jap worker hired toy " the man who had rented our ranch that year, and the poor little fellow never recovered. His spine was hurt, so 5 V he had &© drag his hind legs, and soon died. There were other do^s before these, but yA&wny and :•' Keenie were the outstanding ones in my life. Papa was very fond of Keenie and did his best to comfort him when I was away, and spoke of him in many of his letters to me. He said that Keenie stayed for awhile after I left for Daggett, at Wanda's, even after Papa returned from getting me settled, but later returned to the house on the hill to be near Papa and in wa- his old home surroundings till he wasTOken in the box car with my horse to Daggett. Answers to other questions. Keith's pranks. I have racked my brains to remember something to tell you of the fun Papa and Mr Keith had, and I can only recall the change of date of Papa's 'birth which you already know atoout. But I can add that this prank made my mother very angry, the only time I ever knew her to f- toe angry with Mr Keith. I dont think Papa cared one way \. -.. A or anohher. I do remember them often laughing and cutting up and there was always fun when Mr Keith was there, V A tout I cannot recall any particular1 prank, Fo, I cant rememtoer the violin playing. As I think I told you in that long effort mailed last fall, Mr Keith had a lovely toara,tone voice and always sang for us, Mrs Keith at the piano. "The Spinning-wheel Song" v/as funny and he sang it just for me, but I cant recall anything more atoout it. Annie Laurie was a favorite with all of us. Rememtoer I was a very little girl then. In later years ^ whin Mr Keith came to the house to visit there was less I nonsense, tout on that trip to the Grand Canyon "and" the Petrified Forests with Papa, Dr Taylor, Wanda and I, he was full of pranks on the Pullman, silly to tell perhaps A tout they kept us all laughing, even the young Pullman , Conductor. If "Johnny" had an orange or an apple and did'nt keep his eye on it, "Willie" had it, and so on and on, little silly jokes tout there never was a more care-free jolly outing. But Mr Keith sobered quickly as soon as we got to the Canyon. Near Grandview Point A he would sit for hours with his feet dangling over a ^•wrock, just looking. When he came in to the hotel and joined the rest of us in the evening he would look at Papa and shake his head saying "It's TOO BIG, I cant do it, it's TOO BIG", and I toelieve he later had very little to show for his trip, on canvas, I mean. On the Pullman returning from the Petrified Forest we were the only passengers between Adamana and Williams and we hah the same Pullman Conductor, so as soon as we / were settled in the train the fun went on. Here Dr TayloA-A sonnet was compo.e'dd at the far end of the car where he saugnt peace and quiet, then read to ,n , read to all of us. h ,