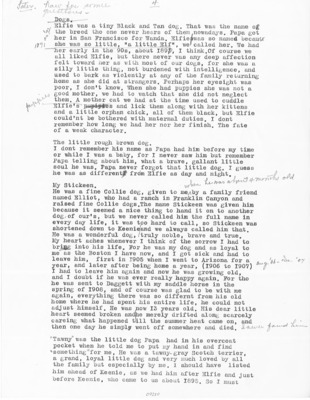 WA /iAS/V, 7 A ,: - _JDegs. ; Elfie was a tiny Black and Tan dog. That was the name og \£l the breed tho one never hears of them nowadays. Papa, got /" her in San Francisco for Wanda. Elfieawas so named becau^A j$«H she was so little, "a little Elf", we'called her. We had —her early in the 90s, about 189^, I think.Of course we all liked Elfie, but there never was any deep affection felt toward her as with most of our dogs, for she was a silly little thing, not burdened with intelligence, and used to bark as violently at any of the family re turning- home as she did at strangers. Perhaps her eyesight was poor, I don't know. When she had puppies she was not a . vJ good mother, we had to watch that she did not neglect v, ' them. A mother cat we had at the time used to cuddle Elf ie's 'Btt§»#£#es and lick them along with her kittens and a little orphan chick, all of them black, but Elfie could'nt be bothered with maternal duties. I dont remember how long we had her nor her finish. The fate of a weak character. The little rough brown dog. I dont remember his name as Papa had him before my time or while I was a baby, for I never saw him but remember Papa telling about him, what a brave, gallant little soul he was. Papa never forgot that little dog. I guess he was as different!?- from Elfie as day and night. aj My Stickeen. He was a fine Collie dog, given to me/by a family friend named Elliot, who had a ranch in Franklin Canyon and raised fine Collie dogs.The name Stickeen was given him because it seemed a nice thing to hand it on to another dog of our's, but we never called him the full name in every day life, it was too hard to call, so Stickeen was shortened down to Keenie/and we always called him that. He was a wonderful dog, /truly noble, brave and true. My heart aches whenever I think of the sorrow I had to brigg into his life. For he was my dog and as loyal to me as the Boston I have now, and I got sick and had to * leave him, first in 1905 when I went to Arizona for a Aki(. 't>l~ ^" ■ >a7 year, and later after being home a year, (1906 to 1907) /' I had to leave him again and now he was growing old, and I doubt if he was ever really happy again. For tho he was sent to Daggett with my saddle horse in the spring of 1908, and of course was glad to be with me again, everything there was so differnt from his old home where he had spent his entire life, he could not adjust himself. He was now 13 years old. His dear little heart seemed broken end&ie merely drifted along scarcely careing what happened t'ill the summer heat came on, and . then one day he simply went off somewhere and died. A-Au.ru "Tawny" was the little dog Papa had in his overcoat pocket when he told me to put my hand in and find. *something"for me, He was a tawny-gray Scotch terrier, a grand, loyal little dog and very much loved by all the family but especially by me. I should have listed him ahead of Keenie, as we had him after Elfie and just before Keenie, who came to us about 1895. So I must 092SO - £*>_.H.,'-^»l