Home > All Reminiscences of John Muir > 16 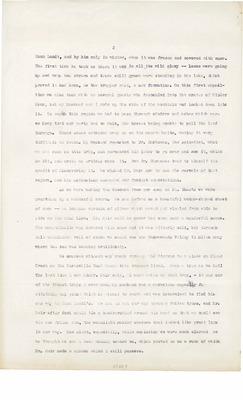 2 Hank Landt, and by him only in winter, when it was frozen and covered with snow. The first time he took us there it w§g M* allots wild glxay — loons were going up &M ™-.cn. the stream and trees still, green were standing in the lake, -± :lcb proved it hat. boon, as the trapper said, a new formation. On this first expedition we also beekwitfo ar, several guests who descended into the crater ©f Cinder Gene, tut a.- husband and I .*o^o up the side cf the mountain and looked down iatc it. Eo realfe this region bad to pass thro h cinder? and ashes whiefe were so Cic- that oar party had to walk, the horses being suable to pull the load through* These ashes attended a:--,; up on the mo an "■" inside, making it verj diffie-ult to roach, ;.a husbaaS reported to Dr. Harkness, the scientist, what •■. seen on i&is trip, ana persuaded lira later to go over and see it, which he did, and mrpi article airou it. 3at Br. Harkness took to himself the credit oi dissevering it. We wished Mr. Muir aos to see the marvels of that region, and his enthusiasm sxcm .< our fondest expectations. As we were \ . \x% ', ie descent froa our camp on Mt« Shasta wo were overtaken a. a wonderful storm. Sfe a .. before us a beautiful wedge-shaped sheet of snow — an ism- ase curtain of silver v$ U ved and rippled from side to side as the ;/ind blew. £r, . iz never ! i seer suci; a wonderful scene. Eie :ir ■.., 5 .. ■ eovered riti snow .ao it s?as bitterly cold, but through tiii -..• ;■ '- veil of store; we could nee the Saerasasnto ?alley 75 miles away wh^ro the sun was beaming brilliantly. We eross< I without any roads throi she Sierras fco s place on Clear Greek on the Susanviile Road whes this trapper lived, Sueh a trip as we hod: The last tfcs . . a • :.ia:-. liuir :: id, X bui e up th fc ;rip, - it was one of the finest trips I ever ... ..... i , husband bad a marvelous c-:ac|4y for attainia say point sshioh he is ., •• - \ = ieterained to flad his Ltrs. - I to 3 t our way threB i fallen trees, and Mr. " air after dark would tie a re ... rot Ls ; so ft.- t we coui:: see •::. follow him, the moonlight inking shadows that looked like great logs in our way. One ai jht, especially, while exploring we were such alarmed as -,:.. t'v, .: a I we sa . bear coming toward us, ushich proved to be a rock of which Mr, ttuir made a sketch which I still possess, -