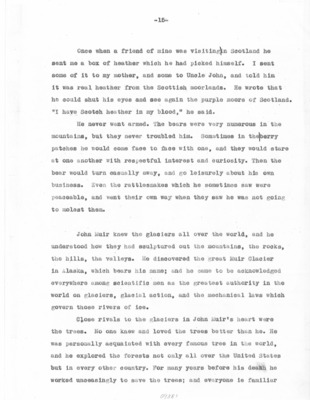 m \ \, Oace when a friend of mine was visltlag^a Scotland he sent me a box of heather which he had picked himself, I sent some of it to my mother, and some to Uncle John, and told him it was real heather from the Scottish moorlands. He wrote that he could shut his eyes and see again the purple moors of Scotland, "I have Scotch heather in my blood," he said. He never went armed. The bears were very numerous in'the mountains, but they never troubled him. Sometimes in thejberry patches he would come face to. fee© with one, and they would stare at oa© another with respectful interest and curiosity. Then the bear would turn casually away, and go leisurely shout his own business. Eves the rattlesnakes which he sometimes saw were peaceable, and went their own way when they saw he was not going to molest them. John Muir knew the glaciers ail over the world, and he understood how they had sculptured out the mountains, the rooks, the hills, the valleys. He discovered the great Muir Glacier in Alaska, which bears his name; and he same to bo acknowledged everywhere ameag scientific sea as the greatest authority in the world on glaciers, glacial action, and the mechanical laws which govern those rivers of ice. Close rivals to • the glaciers in John s«uir's heart were the trees. No one knew and loved the trees better than he. He was personally acquainted with every famous tree in the world, and he explored the forests not oaly all over the United States but la every other country. For many years before his deajih he worked unceasingly to save the trees; and everyone ie familiar