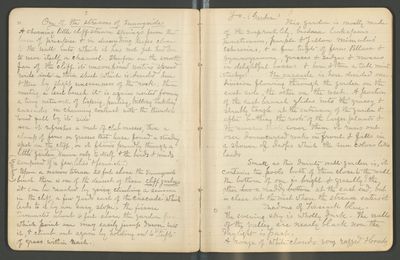 One of the streams of Sunnyside

A charming little cliff stream springs from the base of the precipice & in descending keeps close to the wall into which it has not yet had time to wear itslef a channel. Therefore on the smooth face of the cliff its unconfined waters are spread wide into a thin sheet (which is) divided here & there by slight unevenness of the rock. Then meeting a level bench it is again united forming a tiny network of lisping, purling, [trilling] tinkling cascades in charming contrast with the thunder toned fall by its side.

Here it refreshes a mat of club mosses, there a clump of ferns or grasses that have found a standing spot on the cliff, or it [flows] slips proudly through a little fern & lily garden known only to itself & the birds & winds (composed of a few lilies & ferns, etc.)

It can be reached by [going] climbing a seam in the cliff a few yards east of the cascade (which leads to it by an easy slope). The fissure terminates about 6 feet above the garden from which point one may easily jump down into it, & climb out again by holding on to grass tufts (of grass within reach.)

The cascade is here divided one division flowing through the garden on the east side, the other on the west. A portion of the east branch glides into [the] a grassy & shrubby tangle at the entrance of the garden & after bathing the roots of the larger plants & the mosses that cover them it runs out over down-curved rocks in front & falls in a shower of drops which the sun colors like beads

Small as this dainty wall-garden is, it contains two pools both of them close to the wall the bottom of one is [bright &] gravelly of the other [has a] muddy [bottom] at the east end, but [is] clean at the west where the stream enters it

The evening sky is wholly dark. The walls of the valley are nearly black now the daylight is past.