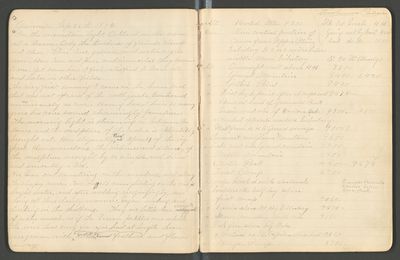 In the mountain light, Oakland winter seems all a dream. Only the kindness of friends stands out clear. Pine trees, granite, and water ouzels now. How true, and pure, and immortal they seem to me, yet somehow I feel satisfied to leave all and labor in other fields.

The very first evening I came in, the brave owl that was not afraid of the earthquake, [too-hooed] unnervously as ever. Having heard him so many years, his voice seemed charmingly familiar.

The morning light is streaming in between the domes and the sculpture of the arches is splendidly brought out. How eloquently [it] they speak[s] of the icy past. How marvelous the richness and delicacy of the sculpture wrought by so simple, and blunt and unwieldy a tool.

I've been out sauntering on the meadows, and along the sleepy river. Two ouzels came glinting on the crisp bright water, and after nodding recognizingly, and doing all their dainty manners, began wading and ducking in the shallows. They are little dun [maggots] nuggets of water music, as if the brown pebbles over which the river has sung for ages had as length been overgrown with feathers instead of mosses and flown away..

" Point at hand of Yosemite Creek basin, west side of Cañon side [de]scended opposite middle tributary. 9800-4800