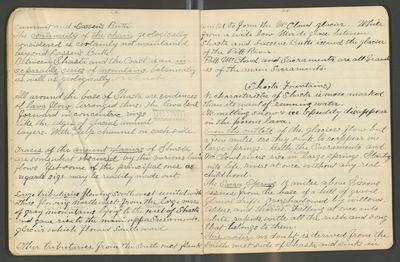 All around the base of Shasta are evidences of lava flow. Arranged thus: The lava bent forward in concentric rings [sketch of curved lines with top and bottom borders] like the edges of glacial annual layers. With a deep channel on each side.

Traces of the ancient glaciers of Shasta are somewhat obscured by the various lava flows. Yet some of the principal ones as regards size may be readily made out.

Large tributaries flowing southwest united with others flowing northwest from the large mass of gray Siskiyou mountains lying to the northwest of Shasta and gave rise to the main upper Sacramento glacier which flowed southward.

Other tributaries from the southeast flank

united to form the McCloud glacier. While from a wide low Mer de glace between Shasta and Lassen’s Butte issued the glacier of the Pitt River. Pitt, McCloud, and Sacramento are all branches of the main Sacramento.

No characteristic of Shasta is more marked than its want of running water. Its melting snow & ice speedily disappear in the porous lava. Even the outlets of the glaciers flow but a few miles ere they sink to reappear in large springs. Both the Sacramento and McCloud rivers rise in these large springs. Starting into life, rivers at once without any real childhood.

The Sacra Spring 1 1/2 miles above Sissons issues from the base of a hill of gravel, Glacial drift = [equals] overshadowed by willows, alders, and thorns crateagus [crataegus]. Falling at once into white rapids, with all the rush and song that belongs to them. This water, no doubt, is derived from the [South] N [north] west side of Shasta and sinks in