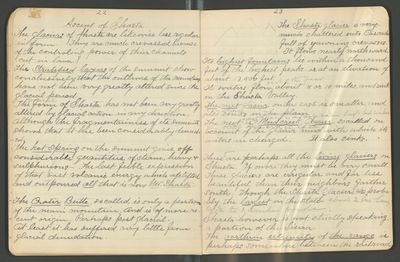 The glaciers of Shasta are likewise less regular in form. They are much crevassed because of the controlling power of their channels cut in lava.

The stratified layers of the summit show conclusively that the outlines of the mountains have not been very greatly altered since the glacial period.

The general form of Shasta has not been very greatly altered by glacial action in any direction. Although the fragmentariness of its summit shows that it has been considered denuded.

The hot springs on the summit gives off considerable quantities of steam, heavy & sulphurious. The last feeble expression of that vast volcanic energy which uplifted and outpoured all that is now Mt. Shasta

The [Crater] Butte so called is only a portion of the main mountain and is of more recent origin. Perhaps post glacial

At least it has suffered very little from glacial denudation.

The Shasta glacier is [very much] shattered into cascades full of yawning crevasses. It flows nearly northward. Its highest fountains lie within a thousand feet of the highest peaks - or at an elevation of about 13,500 feet.

Its waters flow part of the year about 8 or 10 miles, and sink in the Shasta Valley. The next glacier on the east is smaller, and its waters also sinks in the plain. The next is east [ ] is about same length but wider Mudcrest Glacier. So called on account The next [ ] crk [creek] gl. [glacier] [east/last] of the glacier mud with which its waters are charged. It also sinks.

These 5 are [perhaps] all living glaciers on Shasta. If more they must be very small. These glaciers are irregular and far less beautiful than their neighbors farther south. Though the Shasta glacier[s] [are] is probably the largest in the state about 2 ms [miles] long by 1/2 to 1 mile wide. Shasta however is not strictly speaking a portion of the Sierra. The northern extremity of the range is perhaps somewhere between the railroad