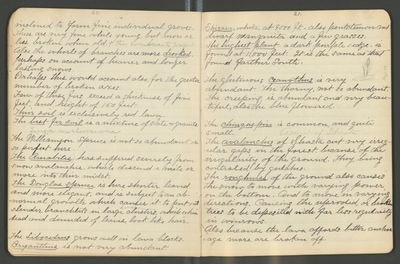 inclined to form fine individual groves. These are very fine while young, but more or less broken when old. & the [cone bracts] project

Also the whorls of branches are more drooked [drooped], perhaps on account of heavier and longer lasting snows.

Few of these firs exceed a thickness of five feet, and height of 150 feet.

Their soil is exclusively red lava.

The best fir soil is a mixture of slate & granite.

The Williams spruce Tsuga mertensiana is not so abundant or so perfect here.

(The Amabilis) has suffered severely from snow avalanches, which descend a mile or more into their midst.

The Douglas spruce is here shorter leaved and more elegant, and is subject to an abnormal growth which causes it to put out slender branchlets in larger dense clusters, which when dead and denuded of leaves, look like hair.

Bryanththus is not very abundant.

The highest plant – a dark purple sedge – is found at 11,000 feet. It is the same as that found farther south.

The glutinous ceanothus is very [sketch: Page 48] abundant. The thorny, not so abundant. The creeping, is abundant and very beautiful, also the blue flowered.

The chinquepin [chinquapin] is common, and quite small.

The avalanches of Shasta cut very irregular gaps in the forest, because of the irregularity of the ground. They being controled [controlled] by gulches.

The roughness of the ground also causes the snow to move with varying power on the bottom. And to move in varying directions. Causing the uprooted, or broken trees to be deposited with far less regularity in winrows.

Also because the lava affords better anchorage more are broken off.