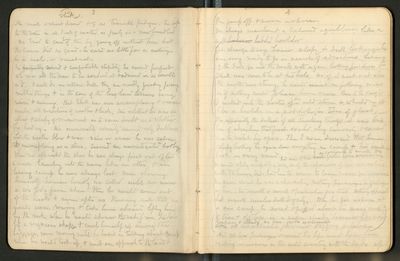 The small & shorthaired & of no traceable pedigree he took to the water in all kinds of weather as freely as a newfoundland. We tried to cure him of this by going off without him but the lesson did no good. He cared as little for a wetting as a seal or muskrat.

In [forfeiting] sound & comfortable stupidity he seemed perfect which was all the more to be wondered at & admired in so small a dog. Small dogs are seldom dull. They are mostly frisky fussy restless things & in the care of the long haired terriers very wise & cunning. But Stickeen was ever uncomplaining & serene under all conditions of weather & luck. His intellect too was so slow & sleepy of moment as to raise doubt as to whether he had any. His immovable serenity seemed only dullness

Let the weather blow & roar rain or snow he was calm & uncomplaining as a stone. Seemed an unmitigated booby

When we approached the shore he was always first out of the canoe launching into the waves like an otter & in leaving camp he was always last. Never showing himself however loudly we called until we were a 100 yards from shore then he would come out of the woods & swim after us knowing well that we could cease rowing & take him aboard, lifting him by the neck. When he would shower the water from his hair by a vigorous shake & curl himself up among the baggage, never moving until he heard us talking about camp. When he would look up & wait our approach to the land &

Then jump off & swim ashore

Yet strange to say however sleepy & dull looking he was every ready to go in search of adventures. Let any of the lads go into the woods with a gun looking for deer & Stickeen was seen to be at his heels, or if I went out when the weather was stormy, he would insist on following me as if nothing could please him more that to be caught (and sucked into the vortex of) in a wild storm & whirled in it like a boulder in a pothole (in times of flood) He apparently the dullest of all thinking things it was this love of adventure that first excited my curiosity & caused me to watch his eyes. There I soon discovered that however sleepy looking his eyes say everything in camp & his ears took in every word He seemed wholly incapable of fun, had none of that brisk frolic some animation so common to small dogs as if the experiences of his ancestors with the hungry Indians had been too serene to leave room for nonsense. He soon showed he was a character, nothing picturesque or grotesque in him, too smooth & small & featureless for that, nothing apparent but smooth noiseless dull dignity. When he got ashore at a new camp he nosed & poked about the mossy roots of trees & old logs in a calm steady businesslike way [like] unfussy & steady as free from excitement an industrious farmer digging potatoes