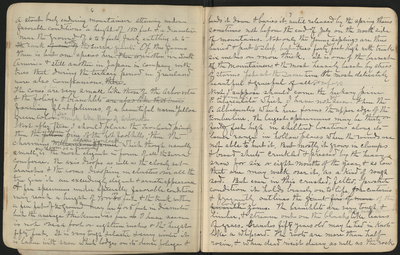 A stout burley enduring mountaineer attaining under favorable conditions a height of 150 feet & a diameter near the ground of 6 to 8 feet fairly entitling it to [the] rank [of one of] with the Sierra Giants. Of this genus there is but one species here. [There is] ? Another in South America & still another in Japan in company with trees that during the tertiary period in Greenland were also companions there.

The cones & lvs [leaves] are very small like those of the arborvitae in the foliage & branchlets [are also like that tree] form[ing] flat plumes of a beautiful warm yellow green color also much like those of Arborvitae.

Next after these I should place the Two-leaved Pine then Sabine Pine of the hot foothills, then the charming Alpine Hemlock [Williamson spruce] which do usually small one to 4 feet in diameter is the most elegant in form of all the Sierra coniferae. The axis droops as well as the closely set branches & the cones drooping in clusters over all the tree give it an exceedingly elegant & ornate appearance. A few specimens under specially favorable conditions may reach the height of 75 or 100 [80] feet in the trunk within a few feet from the ground maybe four or 5 feet in diameter but the average thickness [as] so far as I have seen [in the Sierra] is not over a foot or 18 inches & the height 50 feet. It is very tough & elastic & every winter it is laden with snow which lodges on its dense foliage &

binds it down & buries it, until released by the spring thaws sometimes not before the end of July on the north side of mountains. Not only the young saplings are those buried & put to sleep, but trees 40 feet high with trunks 6 inches or more thick. It is one of the bravest of the mountaineers & the most heavily beset by stress of storms yet at the same time the most delicately beautiful & graceful of all conifers.

Next I suppose I should come to the Hickory Pine P. tuberculata [allennata] which I have not yet seen. They're the P. Albicaulis which here forms the upper edge of the timberline. The largest specimens may be 30 or 40 feet high in sheltered locations along it's lower range in hollow places where the winds are not able to hurt it. But mostly it grows in clumps & broad sheets crinkled & pressed by the heavy snow for six or eight months of the year, & so low that one may walk over it, as a kind of rough side. But even in this crushed, felted, prostrate condition it holds bravely on to life, for centuries & frequently outlines the giant [firs of more] [favorable] of the lower zones. The branchlets are very tough & limber & stream out on the [blasts] [may] [swap] the [summits] like leaves of grass. Branches 50 years old maybe tied in knots like a whipcord. The roots are more than half rosin & when dead resist decay as well as the rocks