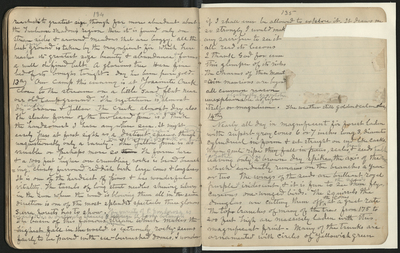 reaches its greatest size though far more abundant about the Tuolumne Meadow[s] region. Here it is found only on stream sides & around meadows that are boggy. All the best dry ground is taken by the magnificent fir which here reaches its greatest size beauty & abundance & forms a well defined belt. A glorious tree. Have fine bed of its boughs tonight. Day has been pure gold.

13th) Our camp this evening is at Yosemite Creek close to the stream on a little sand flat near our old campground. The vegetation is almost dry & already brown & yellow. The creek almost dry also. The slender form of the two leaved pine on its banks is I think the handsomest I have anywhere seen. It might easily pass at first sight as a distinct species though unquestionably only a variety due to [erosive] & rapid growth on good soil. The yellow pine is also variable or perhaps more so [than] the forms here & a 1000 feet higher on crumbling rocks is broad branching with closely furrowed reddish bark large cones & long leaves. It is one of the hardiest of pines & had wonderful vitality. The tassels of long stout needles shining silvery in the sun when the wind is blowing them all in the same direction is one of the most splendid spectacles these glorious Sierra forests has to show. This variety of P. [pinus] ponderosa is regarded as a distinct species P. [Pinus] Jeffreyi by some botanists. The basin of this famous Yosemite stream [which makes the highest fall in the world] is extremely rocky seems fairly to be paved with ice-burnished domes. I wonder

if I shall ever be allowed to explore it. It draws me so strongly I would make any sacrifice to see it all, read its lessons. I thank God for even this glimpse of its riches. The charms of these mountain moraines are beyond all common reason unexplainable as electricity, gravitation or life itself. [or magnetism] The weather still golden & calm, clear.

14th) Nearly all day in magnificent fir forest laden with superb gray cones 6 or 7 inches long 3 diameter cylindrical [in form] & set straight on end like casks. When quite ripe [they fall in pieces,] scales bracts & seeds fall together leaving only as a brown dry spike the axis of the cone which evidently remains on the branches a year or two. The wings of the seeds are brilliant royal purple & iridescent & it is fun to see the seeds [them] fly, curious one-winged birds. The squirrels the douglas are cutting them off the cones at a great rate. The top branches of many of the trees from 176 to 200 feet high are massively laden with this magnificent fruit. Many of the trunks are ornamented with circles of yellowish green