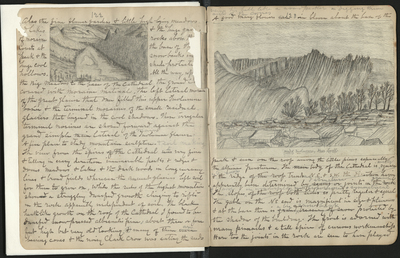 Also the fine flower gardens & little high lying meadows [and] lakes & the huge [quarry] of moraine rocks above [the] forests at the base of the peak & the snow banks in huge cool shade protected hollows. All the way up the Big Meadows to the base of the Cathedral the ground is covered with moraine material, the left lateral moraine of the great glacier that once filled this upper Tuolumne basin & the terminal moraines of the smaller residual glaciers that lingered in the cool shadows. These irregular terminal moraines are shoved forward against the grand simple [main] lateral of the main Tuolumne Glacier. A fine place to study mountain sculpture & soil making.

The view from the Cathedral spires [of the] [was] is very fine & telling in every direction innumerable peaks & ridges & domes meadows & lakes & the dark woods in long curving lines & broad fields wherever the ancient glaciers left soil for them to grow on, while the sides of the highest mountains show[ed] a struggling dwarfed growth clinging to rifts in the rock apparently independent of soil. The black heath-like growth on the roof of the Cathedral I found to be dwarfed snow-pressed albicaulis pine, about three of four feet high but very old looking & many of them are [were] bearing cones & the noisy Clark Crow was eating the seeds

using his bill like a woodpecker in digging them out of the cones. A good many flowers are in bloom about the base of the

[sketch: Head of Tuolumne, Near Lyell]

peak & even on the roof among the little pines especially the Alpine Penstemon. The [main] body of the Cathedral is nearly square & the roof slopes are wonderfully well proportioned & symmetrical [&] [roof] the ridge [of the roof] trending N.E. [northeast] & S.W. [southwest] the direction having apparently been determined by structure [seams or] joints in the granite [rock] [of the roof with both sides is] pretty regular & equal The gable on the NE [northeast] end is magnificent in size & plainness & at the base there is a big snowbank [grand treasury of snow] protected by the shadow of the building. The front is adorned with many pinnacles & a tall spire of curious workmanship. Here too the joints in the rock are seen to have played