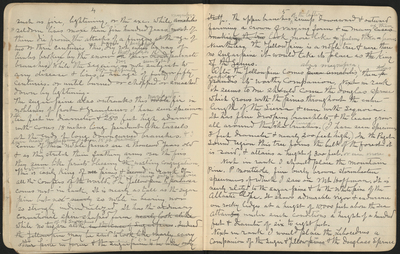 such as fire, lightning, or the axe. While magnifica [amabilis] seldom lives more than 4 or five hundred years. [most of them die from the attacks of fungus at the age of two or three centuries. [This] fungus dry rot that perhaps enters by way of limbs broken by the snow [on] loads their [broad] palmate branches] While the Sequoia does [is] not seem to be subject to any disease & live on indefinitely to an age of forty or fifty centuries or until burned or chopped or smashed down by lightning.

The sugar pine also outranks this magnificent [noble] fir in nobleness of port & grandeur. I have seen specimens 9 or ten feet in diameter & over 200 [250] feet high, adorned with cones 18 inches long pendant like tassels at the ends of long downcurved branches & I have heard of specimens even 15 feet in diameter. Some of these noble pines are a thousand years old & as they stretch their feathery arms over the firs they seem like priests blessing the a waiting congregation. This is easily King of [all] pines & 3d [second] in rank of all the conifers of the world. As far as I know only to Sequoia the Yellow Pine P. ponderosa comes out next in rank. It is nearly as tall as the sugar pine but not [nearly] so noble in bearing nor so strongly individualized. It has the ordinary conventional spire shaped form, [nearly look alike] while no two of the sugar pines are alike [in the case of sugar pines. Indeed the Yellow pine may be said to look like nearly every other pine in form & the sugar pine to be like only]

[itself] The upper branches of the latter sweep downward & outward forming a crown of varying form in many of them [cases making the tree] look more like [a] palm, than [a] pine. Nevertheless, the Yellow pine is a noble tree & were there no sugar pine it would take its place at [the] King of the Genus.

After the Yellow pine comes abies magnifica [picea amabilis] then Abies concolor [p. grandis] its worthy companion. Next in rank it seems to be should come the douglas spruce which grow with the pines throughout the entire length of the Sierra & even with Sequoia. It has fine drooping branchlets & the leaves grow all around them like tassels brushes. (I have seen specimens 8 feet diameter & nearly 200 feet high.) In the Puget Sound region this tree forms the bulk of the forest it is said & attains a height of 300 feet or even more.

Next in rank I should place the mountain pine. P Monticola, fine burly brown storm-beaten specimens of which I saw on Mt Hoffmann. It is nearly related to the sugar pine & to the white pine of the Atlantic slope. It shows admirable vigor & endurance on rocky ledges at a height of 10,000 feet above the sea. Attains[ing] under such conditions a height of a hundred feet & diameter of six to eight feet.

Next in rank I would place the Libocedrus a companion of the sugar & yellow pines & the douglas spruce.