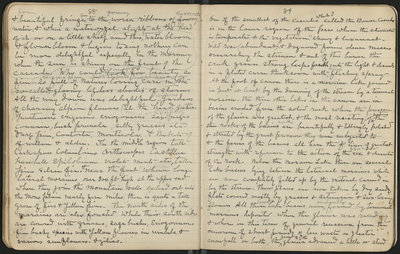 [&] form beautiful fringes [for] [to the foamy woven ribbons of foamy water [the cascade] water & when a water ouzel alights at the head of it or on a little shelf] // X Trans amid this foamy water bloom & flower bloom & begins to sing nothing can be more delightful especially in the morning when the sun is shining on the front of the cascade. Who could imagine [look for] beauty so fine in so savage a place [full of nature’s loving care in the so called gloomy lifeless abodes of storms] [which at first sight seems as] All the way down was delightful Alpine Gardens of charming Alpine flowers at the head. Genatians penstemons erigerons eriogonums saxifrages full of cowania, bush primula, silky grasses, etc. [dwarf] pines, contorta, Monticola, & thickets of willow & alder. In the middle region tall larkspurs, columbines orthocarpus castillica harebell Epilobium violets mints etc, taller pines silver fir & near the foot ((trans where long lateral moraines over 300 feet high at the upper end where they join the mountain walls extend out into the Mono plain nearly five miles )) there is [quite] a [tall] grove of tall firs & yellow pines. ((Trans The north sides of the moraines are (also) forested while their south sides are covered with grasses, sage brushes, eriogonum, fine bushy species with yellow flowers in rimbeds & various sunflowers & gilias.))

One of the smallest of the cascades which I called the Bower Cascade is in the lower region of the pass where the [climate is temperate and] the vegetation is showy & luxuriant. Wild rose (abundant) & dogwood forms dense masses overreaching the stream & out of this bower the creek grown strong leaps forth into the light & descends in a fluted curve thicksown with crisp flashing spray. At the foot of canyon there is a [moraine] lake formed in part at least by the damming of the stream by a terminal moraine. The three other lakes in the canyon are in the basin eroded from the solid rock where the pressure of the glacier was greatest & the most resisting potions of the [the rocks of the] basin[s] rocks are beautifully & tellingly polished & striated [by the great pressure they were subjected to] & the forms of the basins all have the [f] lines of greatest strength with reference to the action of the glacier [ice] & character of the rock. Below [the] Moraine Lake there are several lake basins lying between the lateral moraines which are now completely filled up by the material carried in by the stream. Their places are now taken by dry sandy flats covered mostly by grasses & Artemesia & sun-loving flowers. All these lower lake basins were evidently formed by terminal moraines deposited when the glacier was receding & where in this time of general recession from the occurrence of short periods of less waste or greater snowfall or both, the front of the glacier advanced a little or stood