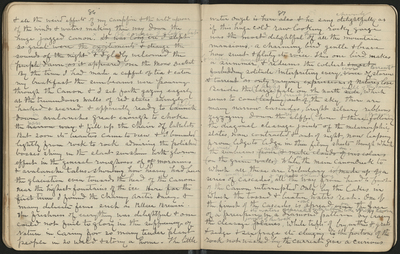 & all the weird effects of my campfire & the wild uproar of the winds & waters making their way down the huge jagged canyon. X Of course I slept but [It was long ere I slept so great were the excitements & strange the sounds of the night] little & [I] gladly welcomed the [purple] dawn [as it appeared] over the Mono Desert. By the time I had made a cupful of tea & eaten my breakfast the sunbeams were pouring through the canyon & I set forth gazing eagerly at the tremendous walls of red states savagely hacked & scarred & apparently ready to fall in [launch down] avalanches great enough to choke the pass [narrow way] & fill up the chain of lakelets. But soon its beauties came to view & I bounded lightly from rock to rock admiring the polished bosses shiny in the slant sunshine with glorious effect in the general roughness of [of] moraines & avalanche talus showing how heavy had been the glaciation even towards the head of the canyon near the highest fountains of the ice. Here [for the first time] I found the charming Arctic Daisy & many delicate ferns such as Pellaea Breweri. The freshness of everything was delightful & one could not fail to glory in the sufficiency of Nature in caring for so many tender plant people in so wild & stormy a home. The little

water ouzel [is here also & he] sang cheerily [delightfully] as if this huge cold raw looking rocky gorge was [the most] a delightful home of all the mountain mansions – a charming bird gentle & brave how sweet & fluty its voice. This one bird redeems the coldest [and most forbidding] solitude & makes a summer anywhere interpreting every word [voice] of torrents & storms [and torrent as only varying expressions of Natures love] besides the high (large) fall on the north wall [side] of the canyon which seems to come [leaping out of] direct from the sky there are many narrow cascades, brought silvery ribbons zigzagging down the red cliffs (here & there) tracing (following) the diagonal cleavage joints of the metamorphic slate, now contracted & out of sight, now leaping from ledge to ledge in [thin] filmy sheets through which the irised sunbeams sift [pour & make clouds in of iris colors on the grim walls]. While on the main Canyon Creek to which all these are tributary is [made up of] a series of small falls & cascades & rapids extending all the way from head to foot of the canyon interrupted only by the lakes in which the tossed & beaten waters rest. One of the finest of the cascades is out spread on [over] the face of a precipice its waters separated into ribbons like strips & woven in a diamond pattern by tracing the cleavage joints in the rock [planes], while tufts of bryanthus, [&] grass, [&] sedge & saxifrage etc. [clinging to the portions of the rock not washed by the current give a curious]