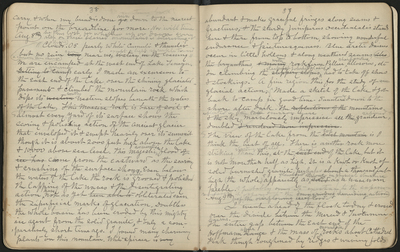 carry & when my bread is done run [go][sauntering back][down to the nearest point on the breadline] for more. Nor will time being thus lost, for whether up or down every step on these blessed mountains is interesting.

Aug [August] 8) Trans ((Clouds .05 pearly white cumuli & thunder but no rain came [very] near us except a light sprinkle toward [watering in the] evening. A curious time change. We are encamped at the west end of Lake Tenaya. [Getting to camp] Arriving early I made an excursion to the East end of the lake over the shining glaciated pavements & climbed the mountain rock which dips it's [western] south western slope's beneath the waters [of the lake this massive rock is bare of soil and] almost every yard of its surface shows the scoring & polishing action the ancient glacier that enveloped it & swept heavily over its summit though it is about though it is about 2,000 feet high above the lake & 10,000 above sea level. This majestic & ancient ice flood [of ice] has come from the eastward as the scoring & crushing of the surface shows. Even below the waters of the lake the rock is still grooved & polished the laughing of the waves & disintegrating action have not as yet [been able to] obliterated even the superficial marks of glaciation. Doubtless the whole basin has been eroded by this mighty ice agent from the solid granite, & only a comparatively short time ago. I found many charming plants on this mountain. While spiraea is [very]

abundant & makes graceful fringes along seams & fractures, & the sturdy juniperus occidentalis stand here & there from top to bottom, showing wonderful endurance & picturesqueness. Blue arctic daisies occur in little hollows & along weathered seams [also the bryanthus] [& many] with rock forms Pelleae Cheilanthes Allosorus, etc. In climbing the steepest polished places I [slippery slopes] had to takeoff shoes & stockings. A fine region this for the study of [ice] glacial action [ARROWS] Made a sketch of the lake & got back to camp in good time. Sauntered down to the shore after dark. The [reflections of the] mountains & sky reflected in the lake mirror were marvelously impressive. All their grandeur refined & doubled [and rendered more impressive.]

The view of the lake from the top [east mountain] is I think the best of all. There is another rock more striking than this standing isolated at the head [east end] of the lake, but it is not more than half as high. It is a knob or knob of solid burnished granite perhaps about 1,000 feet high (the hall) & apparently as flawless & strong in physical structure as [solid] as a wave worn pebble & probably owes its existence to the superior resistance it offered to the down-grinding denuding action of the overflowing ice flood.

I went ahead of the flock today & crossed over the divide between the Merced & Tuolumne basins. The entire gap between the East end of the Hoffmann spur [range] & the mass of mountain rocks about Cathedral Peak though roughened by ridges & waving folds