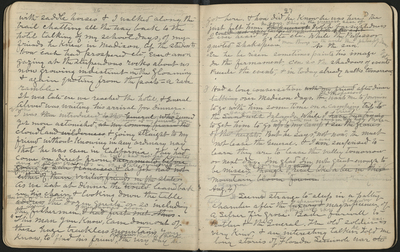 with saddle horses & I walked along the trail chatting all the way back to the hotel talking of my school days, with my friends he knew in Madison, of the students, how each & prospered etc, ever & anon gazing at the stupendous rocks about us now growing indistinct in the gloaming & again quoting from the poets - a rare ramble.

It was late ere we reached the hotel, & General Alvord was waiting his arrival for dinner. When I was [then] introduced [to the general who] he seemed yet more astonished than the Professor at my descent from [at my coming from the] Cloudland [wilderness], & going straight to my friend without knowing any ordinary way that he was even in California. They had come direct from the East & had not yet visited any of their friends in the state & considered themselves undiscoverable. [Sacramento before going to San Francisco & is yet had not either of them visited friends in the State] As we sat at dinner the General [would] leaned back in his chair & looking down the table thus introduced me to [address] the dozen guests or so including the staring fishermen mentioned above. [I had first met. Thus] “This man you know, came down out of these huge trackless mountains you know, to find his friend Professor Butler here the very day he

got here. & how did he know he was here? He just felt him, he says. This is [the queerest] case of the Scotch farsightedness I ever heard of, [could not apply tactics to improbabilities of this sort,” etc. etc. While the Professor quoted Shakespeare, “More things in the world than philosophy dreams of”, etc. “Ere he be risen sometimes paints his image

In the firmament, e’en so the shadows of events

I had a long conversation [with my friend] after dinner [talking] over Madison days. The Professor [he] wants me to promise to go with him sometime on a camping trip in [to the Sandwich] Hawaiian Islands. While I tried [have been trying] to get him to go back with me to camp in the high Sierra [up to my camp & see the glories of the heights]. But he says “not now” He must not leave the General. & I was [am] surprised to learn that they are to leave the valley tomorrow or next day. I'm glad I'm not great enough to be missed in the busy world [though] I [should] revel like a bee in this mountain bloom forever.

Aug. [August] 4) It seemed strange to sleep in a paltry hotel chamber after the spacious [luxury and] magnificence & luxury of a silver fir grove & the starry sky. Bade farewell to my friend Butler & the General. The old soldier was [is] very kind, & an interesting talker. He told me long stories of the Florida Seminole War [etc]