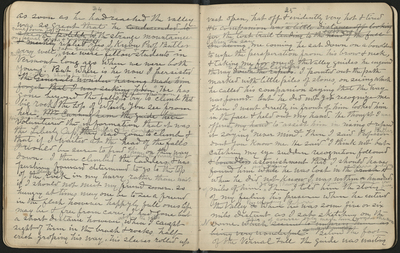 as soon as he had reached the valley was so great that he [condescended to speak politely to] came down to meet the strange mountaineer on equal terms & courteously [and meekly] replied, “Yes, I know Prof [Professor] Butler very well, I'm General Alvord & we were fellow students in Rutland, Vermont long ago when we were both young.” “But where is he now,” I persisted cutting short his story. [The General’s wonder having made him forget that he was that I was seeking him] “He has gone beyond the falls with a companion to try to climb that big rock the top of which you see from here.” [Mr. Cunningham the guide now here] His guide now volunteered the information that it was the Liberty Cap Prof [Professor] Butler & his companion [they] had gone to climb & that if I waited at the head of the fall’s Trail I [that] would be sure to find them on their way down. I then climbed the alongside the ladders alongside Vernal Fall & was pushing forward determined to go to the top of the Liberty Cap rock in my hurry, rather than wait if I should not meet my friend sooner. So hungry at times may one be to see a friend in the flesh however happily full one's life may be & free from care. I had gone but a short distance however above the falls when I caught sight of him in the brush & rocks half erect groping his way, his sleeves rolled up

vest open, hat off & evidently very hot & tired. [His companion was a little distance off looking for the lost trail leading to the [ladders] head of the fall. On seeing] When he saw me coming he sat down on a boulder to wipe the perspiration from his brow & neck, & taking me for one of the Valley guides he enquired the way to the fall ladders [down the rapids]. I pointed out the path marked with a little piles of stones, on seeing which he called his companion saying that the way was found. But he did not recognize me. Then I went directly in front of him looked him in the face & held out my hand. The thought I was offering [my hand] to assist him in rising & refused it saying, “never mind”. Then I said, “Professor Butler don't you know me?” He said, “I think not” but catching my eye sudden recognition followed & [boundless] astonishment that I should have found him just when [while] he was lost in the Sierra wilderness [brush] & when he did not know I was within [a] hundreds of miles of him. “John Muir John Muir where have you come from?” Then I told him the story of my feeling his presence when he entered the Valley the evening before [and] when he was some five or six miles distant as I sat sketching on the N [North] Dome. This of course only made him wonder the more [which seem to impress him as being very wonderful as well it might] Below the foot of the Vernal fall the guide was waiting