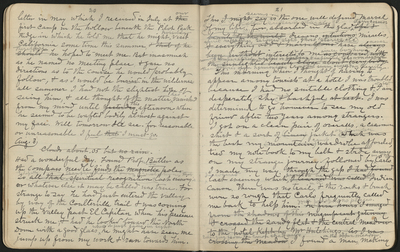 letter in May which I received in July at [the] our first camp in the hollow beneath the Pilot Peak Ridge in which he told me that he might possibly visit California sometime this summer, & [that if he should he] therefore hoped to meet me. But inasmuch as he named no meeting place, & gave no directions as to the course he would probably follow, & as I would be [buried] in the wilderness all summer I had not the slightest hope of seeing him, & all thought of the matter had vanished from my mind until [yesterday] this afternoon when he seemed to be wafted bodily almost against my face. Well tomorrow I'll see, for reasonable or unreasonable I feel [that] I must go.

Aug. [August] 3) [Clouds about .05 but no rain.] Had a wonderful day. Found professor Butler as the compass needle finds the [magnetic] poles. So last evening’s [all that spiritual recognition] telepathy transcendental [x ray] revelation [that] that last evening or whatever else it may be called was true. For strange to say that he had just entered the Valley by way of the Coulterville Trail & was coming up the Valley past El Capitán when his presence struck me, & had he looked toward the North Dome with a good glass when it first came in sight he might have seen me jump up from my work & run towards him.

This seems [I might say is] the one well-defined marvel of my life of the kind called supernatural for absorbed in the glad starry cosmos [life & beauty of the world] dreams, [intuitions] miracles, spirit rappings, second sight, ghost stories etc. have [always] never [been without] interested [to] me since boyfriend [as compared with the sunlighted beauty close about everybody.] seeming comparatively useless or vulgar & infinitely less wonderful that Nature’s open harmonious songful sunny everyday beauty. This morning when I thought of having to appear among tourists at a hotel I was troubled because I had no suitable clothing & at best [I] am desperately bashful & shy [at best]. I was determined to go however to see my old friend after two years among strangers. I got on a clean pair of overalls, a cassimere shirt of a sort of [linen] jacket or jumper [which was] the best my [mountain] camp wardrobe afforded, tied my notebook to my belt & strode away on my strange journey followed by my dog Carlo I made my way through the gap [I had found] discovered last evening which proved to be [I learned was called] Indian Canyon. There was no trail in it, & the rocks & brush were so rough that Carlo frequently called me back to help him down precipitous places. [In five hours I emerged from the shadows of this magnificent gateway & crossed the sandy flat & the central meadow to the hotel kept by Mr. Hutchings. As I was crossing the meadow] Emerging from the canyon shadows I found a man on the upper meadow making