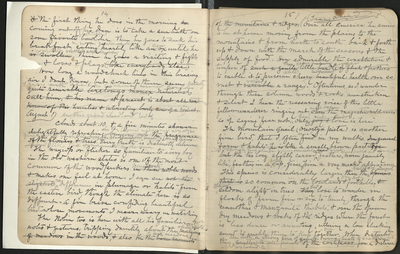 [&] the first thing he does in the morning [on] coming out of his den is to take a sunbath on some favorite flat topped boulder. Then he goes to seek his breakfast in some garden hollow eating heartily like a crow [an ox] until he is comfortably swelled out [bag] [is swollen], then he goes a visiting & fights & loves & plays [like everybody else]. How long a woodchuck lives in this bracing air I don't know, but some of them seem rusty & gray with age like lichen-covered boulders [quite venerable. Arctomys Monax naturalists call him, & his name at present is about all that is known/we know of this harmless & interesting burly cow of a rodent.

August 1) Another grand Cloudland today [clouds about .10], & a five minutes shower [delightfully] refreshing the blessed wilderness already so fragrant & fresh, steeping the black meadow mould & dead leaves [steeped] like tea [and warmed by the sun][bringing out the fragrance of the flowers & trees]. Every breath is distinctly delicious the waycop or flicker so familiar to every boy in the old Western states is one of the most common of the woodpeckers hereabouts [in these noble woods] & makes one feel at home. I can see [not the slightest] no difference in plumage or habits from the eastern bird, though the climate here is so different. A fine brave confiding beautiful bird whose movements never weary in watching.

The Robin too is here with all his familiar notes & gestures, tripping daintily about in the [margins] open garden spots & high meadows. [of Meadows in the woods, & also on the bare summits]

[of the mountains & ridges.] ? trans ahead ? Over all America he seems to be at home moving from the plains to the mountains & from north to south back-and-forth up & down with the march of the seasons & the supply of food. How admirable the constitution & temper of [such a gentle] this brave [and cheery] able little singer [red breasted] [bundle of flesh & feathers] to enable it to preserve cheery beautiful health over so vast & varied [variable] a range. Oftentimes as I wander through these solemn woods [and rocks] awe stricken & silent I hear the reassuring voice of this little fellow wanderer ringing out sweet & clear [over the majestic wilderness] as if saying “fear not, fear not, only [joy and][Gods] love is here”.

The mountain quail (Oreortyx picta) the is another fine bird that I often meet [find] in my walks. [In general form & habits he is like] a small brown partridge [but the two] with a very [strikingly] long slender arrowy ornamental crest long slightly curved [head] feathers close packed as to [ ] [or] [one] worn jauntily like a feather[s] in a boy’s cap, giving him a very marked appearance. This species is considerably larger than the Valley Quail [species] [that is] so common in [on] the [lowlands and] dry hot foothills, [and] They seldom alight[s] in trees but [they] love to wander in flocks of from five or six to 20 through the ceanothus & Manzanita tickets, & over the open dry Meadows & rocks of [the] ridges where the forest is less dense or awanting, uttering a low clicking sound to enable them to keep together. When disturbed they [scatter to all points of the compass for] rise with a strong [birr] of quick wing beats & scattered as if exploded to a distance