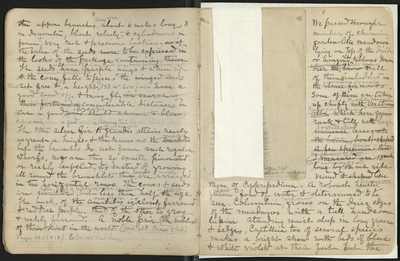 The upper branches. They are about 6 inches long, 3 in diameter, blunt, velvety [&] cylindrical in form & very rich & precious looking [as if the value of the seeds were to be expressed in the looks of the package containing them.] The seeds are about ¾ of an inch long, dark reddish brown with brilliant iridescent purple wings & when ripe [&] the cone falls to pieces & the [winged] seeds thus set free & at a height of 150 to 200 feet have a good sendoff & may fly [in search of their fortunes] a considerable distance in [case] a good [wind should chance to blow] breeze & it is [only] when a good wind is blowing that they are likely to fly.

The other silver fir [P. Grandis] Abies concolor attains nearly as great a height & thickness & the magnifica [amabilis] but the branches do not form such regular whorls, nor are they so exactly pinnated or richly leaf clad. [as] Instead of growing all round the branchlets the leaves are mostly arranged in two horizontal rows. The cones & seeds are [similar] like those of the magnifica in form but less than half as large [the size] The bark of the magnifica [amabilis] is reddish purple & closely furrowed. That of the concolor [other] is gray & widely furrowed. A noble pair. The noblest of their kind in the world. (Here add Crane Flat pages 16, 17 & 18) to be added here.

We passed [thorough] a number of charming garden-like meadows lying on top of the divide or hanging like ribbons down over [the brow &] [either side of] its sides all of them imbedded in the glorious forest [dense fir woods] some [of them] are taken up chiefly with the white flowered Veratrum Californium [Alba which here grows] rank & tall with large boat shaped [immense] leaves [at the bottom, boat shaped A few specimens that I measured are 13 inches long by 12] [of [ ] is the largest of them] about a foot long & 8 or 10 inches wide, viewed [& shaped] like those of Cypripedium. A robust hearty liliaceaus plant [fellow]. Columbine & larkspur grow[s] on the drier edges of the meadows with a tall handsome lupine standing waist deep in long grasses & sedges, Castillica too of several species makes a bright show with beds of [blue & white] violets at their feet. But the