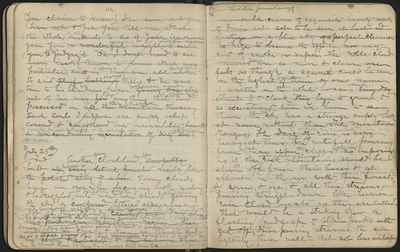 [You claim to know I’ve seen it & you have not & yet you tell me what the whole it all amounts to as if your ignorance gave you a wonderful/some insight[& advantage over me] to enable you to in judging “Oh I don’t need to see every rocky canyon to know what any particular one is like. They’re [are] all the same [alike]” So I said [sheep tallowy] poor Billy & he was true to his blindness, never drawn aside [going one step out of his way for] by anything that Nature [God] possessed in all the Sierra [this mountain] treasury. Such should I suppose are simply asleep (covered and)/or smothered (into insensibility) beneath in mean pleasure & cares [a nonconducting incrustation of dirty indulgences [sin]]

Another fine cloudland [was carefully built up today every detail finished nicely like the polished sting of a bee.] Some clouds have an overripe decaying look watering the bedraggled & drawn on into wind torn shreds & patches giving the sky a [confused] littered appearance. Not so these midday Sierra summer midday clouds. [of the Sierra] All are beautiful with smooth definite outlines & fine curves like those of glacier polished domes. They begin to grow about 11 o’clock & seem so wonderfully near & clear from this high [Yosemite] camp one is tempted to try to climb them & trace the streams that power like cataracts from [Created every day above this particular mountain region. Every outline is crisp & keen as though cut in stone & polished & the forms show]

X Their shadowy [hidden] fountains. X [innumerable curves of exquisite beauty works of divine art set to be seen at best advantage on a blue sky of perfect clearness. No haze to obscure the effect nor any kind of smoke or vapor the noble cloud masses. Some are so near & clear one feels as though a squirrel could be seen on the highest dome of them, or ones name if written in the white [bosses] nearly. Everyday about 11 o’clock they begin to grow & so accustomed are [have] we been to see them, the sky has a strange empty look at noon, without these white mountain ranges. The dash of rain to which they give birth is often very heavy (at times) a sort of one waterfall pouring from (these upper the cliffs of the sky) as imposingly as if [they were] pouring from rock mountains [should be shorn off from their bases & set afloat in the air with all their [furniture] of forests & snow & ice & all while their streams great & small fell like pouring straight down like heaven rain. Cloud bursts as they are called. That would be a striking view a floating landscape of Alpine peaks with [cut off] their downpouring streams, the sun lighting them well. But not less wonderful]