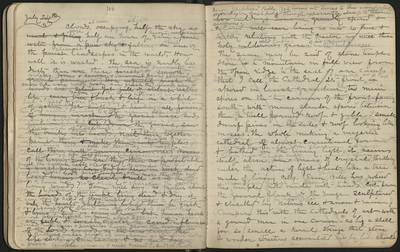 Clouds at noon occupying about half the sky [as usual & giving] gave half & hour of heavy rain to wash [& refresh] Pure water from a pure sky & falling on] one of the cleanest [purest] landscapes in the world. How well it is washed. The sea is hardly less dusty than [are] these ice burnished pavements & ridges domes & canyons & summit peaks plashed with now like waves with foam. How fresh the woods are & calm now the past films of cloud have been wiped from the sky! A few minutes ago every tree was excited, bowing to the roaring [blas] storm, waving, swirling, tossing their branches in glorious enthusiasm [of] like worship. But though to the outer ear these trees are now silent their songs never cease every hidden cell is throbbing with music & life every fibre thrilling like harp strings while incense is ever flowing from the balsam bells & leaves. No wonder the hills & groves were God’s first temples & the more they are cut down & hewn into cathedrals & churches to farther off & dimmer seems the Lord Himself. The same may be said of stone temples. Yonder to the eastward of our camp grove stands one of Natures cathedrals almost conventional in form about 2000 feet high Nobly adorned with spires & pinnacles hewn from the living rock thrilling under floods of sunshine as if alive like a grove temple & well named “Cathedral Peak” [forests & smooth granite pavements. How infinitely fresh the woods are, silent yet full of ardent restless life, every tree & bush & leaf in a whirl of action. Yet soothing & healing all forms of human unrest. The groves were God’s first temples Cut down the groves saw the trunks into boards, nail them together, paint them & make them into temples. Call them with many ceremonies Houses of the Living God. Are they then as profitable to worshipers? Can God be seen in such dead board houses so clearly & well as in the loving woods? Some will say no matter about the boards of the temple being dead & dry if only the hearts sheltering behind them be quick & living. God is everywhere but human hearts are feeble & sensitive & catch the sacred influences of the Lord’s woods as the trees catch the life stirring sunbeams & no dead dry]

Even Shepherd Billy turns at times to this wonderful mountain building though apparently deaf to all stone sermons. [box buildings however grandly spired & colored will ever bring us into so true & healthy relations with the Creator as will these holy wildernesses wild temple] groves of his rejoicing in the wilderness. The same may be said of stone temples. Yonder stands [there is] a mountain in full view from the open ridge to the east of our camp grove [that] I call it the Cathedral. Its front facing south 2000 feet high [is] spired in lavish grandeur has two main spires on the two corners of the front facing south with many slender spires or pinnacles between them. It has a well formed roof & gable & small dwarf pines on its [the] sides & roof at this distance looking like mosses. The whole making a majestic full dome [cathedral of] almost conventional in form with spires & pinnacle in glorious array & bathed in the living light, it seems itself alive hewn from the living rocks on a mass] of nebula of starry crystals thrilling under the action of light & heat like a tree made of living cells. Even Shepherd Billy has noticed this mountain temple though he minds it but little. [not made with hands] Hewn [cut] from the general flank of the range sculptured & chiseled by the hand of Natures ice & snow & rain. Compare this with the cathedrals of art with a gowned man in one corner so big a shell for so small a kernel. Strange that stone & wooden structures accumulated bit by bit should