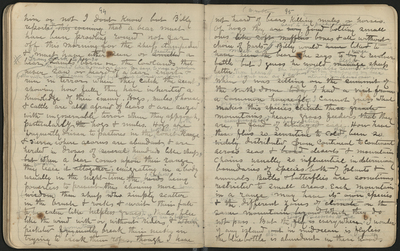 him or not I don’t know but Billy reported [this evening] that a bear must have been prowling round not far off this morning for the sheep stampeded & must have either seen or scented [smelled] a bear. # trans back to pg 34 He would like to meet a bear, he says, to wage a revolver battle with him but I guess he could fight sheep better than bears. Lambs born in the lowlands that never saw or heard of a bear snort & run in terror when they catch the scent, showing how fully they have inherited a knowledge of their enemy. Hogs, mules, & horses & cattle are all [so] afraid of bears & are seized with ungovernable terror when they approach, particularly the hogs & mules. Hogs are frequently driven to pastures in the foothills of both the Coast Range & Sierra where acorns are abundant & are herded in droves of [several] hundred like sheep. [but] When a bear comes to [upon] their range, they promptly leave it [altogether] emigrating in a body usually in the night time, their kickers [herds] being powerless to prevent thus showing more sense [wisdom] than sheep that [who] simply scatter in the brush & rocks & await their fate [to be eaten like helpless grass] Mules flee like the wind with or without riders when they see a bear & if [when] picketed sometimes [frequently] break their necks in trying to break their ropes, though I have

not heard of bears killing mules or horses. Of hogs they are said to be particularly [very] fond bolting small ones [like soft muffins] bones & all without choice of parts. [end of line indicating transition…] [Billy] would [have] liked to meet a [have seen the] bear he says to wage a revolver battle with him but I guess he would fight [manage] sheep better than bears.// The housefly also seemed at home & buzzed about me as I sat sketching & enjoying my bear interview now it was over. [When I was sitting on the summit of the North Dome today I had a visit from a common housefly.] I cannot guess what draws houseflies so far up [makes this species climb these granite] the mountains, heavy grass feeders as [that] they are sensitive to cold & fond of domestic [civilized] ease. How have [these flies so sensitive to cold] they been [so widely] distributed from continent to continent across seas & [broad] deserts & mountain chains usually so influential in determining boundaries of species both of plants & animals. Beetles & butterflies are sometimes restricted to small areas. Each mountain in a range & even the different zones a mountain [of climate] may have its own [ ] species. [on the same mountain by & which they do not pass.] But the housefly [fly is] seems to be everywhere. I wonder if any island [out] in midocean is flyless. The blue bottle also is abundant in these Yosemite woods