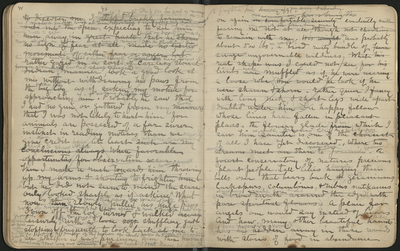 [to discover me] I thought I would like to see this gait in [running] so I made a sudden rush at him shouting & swinging my hat to frighten him [throwing up my arms & shouting] [stepped briskly forward out into the open, expecting to see him make haste to get [run] away [in great haste] But to my dismay he did not run [at all] or show any sign of running on the contrary he stood his ground ready to fight & defend himself, [ curious] lowered his head, thrust it fiercely forward, looked sharp & fierce. [but he showed no sign of fear at all, made no excited movement of either fear or anger but rather gazed in a sort of careless stoical Indian manner, took a good look at me without drawing his paws from the fallen fir [big log] as if seeking my motive for approaching him. Probably she saw that I had no gun or gathered from my looks [manners] that I was not likely to hurt him for animals are possessed of a far surer instinct in reading motives that we usually give them credit for. At least all my best observations tend to show that [such are my conclusions always when favorable opportunities for observation occur. Then I make a rush towards him [to see if I could] throwing up my arms & shouting to frighten him but he did not seem to mind the scare only looked sharply as if asking “What now.”] & I began to fear that upon me would fall the work of running [away], but I was afraid to run & therefore held my ground.[Then] He slowly pulled his huge paws down off the log turned & walked [away] leisurely up the meadow with a loose [soft] shuffling gait stopping frequently to look back [at me] to see whether I was pursuing him then moving staring at him within a dozen yards & hoping the power of the human eye would prove as great as it is [said] [to] [be] or thereabouts. How long our strenuous [uneasy] interview lasted I don’t know, but [at length]

on again [in comfortable security & secure in his strength] evidently neither fearing me very much or trusting me [not at all, though not choosing to remain with me. His might] He was probably about 500 lbs in weight, a broad rusty bundle of pure savage] ungovernable wildness [What his real shape was I could not see, for his limbs were are muffled as if he were wearing a loose robe. How would he look if he here shaven & shorn, rather queer I fancy with long neck & short legs wide apart doubled under him]. A happy fellow whose lines have fallen in pleasant places, the flowery glade in [from] which I saw him [saunter] so well framed like a picture is one of the best [choicest] of all I have yet discovered [where two small streams meet on their way down to Yosemite Valley] A [forest] conservatory of nature’s precious plant people. Tall lilies swing [hanging] their bells over that bear’s back, [and] with geraniums, larkspurs, columbines, & rubus nutkanus brushing against his sides [in broad swath around the edge with pure spiritual flowers] A place for angels one would say instead of bears & how many other beautiful haunts he has [ has he hidden away][ does he saunter through] in these woods with stores of food in abundance