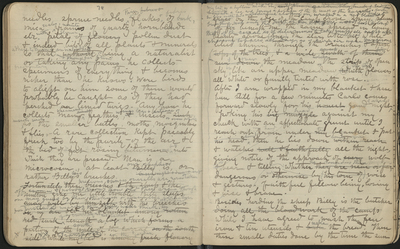 Needles, spruce needles, thin [fibres &] flakes & fibres of bark mica scales, minute grains of quartz hornblende etc. with flower petals [of flowers] pollen & dust & indeed bits of all plants & minerals adhere to them are imbedded so that though far from [without] being a naturalist [or taking any pains] he collects fragmentary specimens of everything & becomes richer than he knows. Were birds to alight on him some of them would probably be caught as if they had been perched on limed twigs. Any how he collects many specimens, [small] feathers, wings legs & antennae of insects such as the smaller beetles, moths, mosquitoes & flies, a rare collection kept passably fresh too by the purity of the air & [the bed of fat] [rosing bituminous] beds into which they are pressed. Man is a microcosm, at least our shepherd [Billy] is or rather his breeches [Billy’s]. [Fortunately] These precious canvas overalls are never taken off [even with] & nobody knows how old they are though one may guess by their thickness & concentric structure [for] instead of wearing them, they wear thick. [breeches & the sheep & the mutton give me little trouble Billy sleeps away well by himself with his breeches on in an old red blanket among rotten red punk [of a crumbling red blanket] beneath a log which forms a portion of the [south] wall of the corral on the south side] XXXX Transpose [While my bed is in the garden among fresh flowery

his bed is a hollow made in dryrot dust in just [very [punt] of a crumbling trunk of red fir beneath] beside a log which forms a portion of the S. wall of the corrals & there he lies with his wonderful clothes on, wrapped in a red blanket breathing not only the dust of the decaying wood but also that of the corral as if determined to take snuff all night after chewing tobacco all day as if pure air were dangerous. [grass] on the edge of the camp grove spicy plumes [of fir] beneath me the same spread in living beauty above [me]. The stars like big white lilies shining through the branches [& spiry tops of the trees & a wide swath [sweep] of them [firs] in sun & over down] the meadow [which] the strip of open sky is like an upper meadow with its star flowers all white or faintly tinted with rose. After I am wrapped in my blanket & have been still for a few minutes Carlo comes forward slowly for his [honest] good night caress poking his [big muzzle] head against my cheek with an affectionate grunt until I reach out from under the [my] blanket & pat [his head] him then he lies down beside me [within reach] & watches [well & faithfully] all the night, giving notice of the approach of [every] wolf or bear & telling whither he considers them [they are near or far] dangerous or not [otherwise] by [his tone of voice] & gestures faithful fellow being loving wise & brave. Besides herding the sheep Billy is the butcher [doing all the bloodwork of the camp] while I have agreed to wash the few iron & tin utensils & make [bake] the bread. Then these small duties done by the time the sun