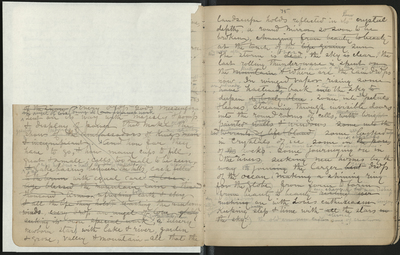 [sketch cut out from reverse side of page]

…[of the snow] every drop God’s messenger, an angel of love doing its [own special work] sent on its way with majesty & pomp & display of power that make man’s the greatest show [ridicuous] [ridiculous] [of the ambassadors of Kings shabby [mean & insignificant][And] how far they have to go & how many cups to fill, great & small, cells too small to be seen & the cups holding half a drop as well as lake basins between the hills, cache replenished [filled to the brim] with equal care[& love. Aye blessed the mountain rain a thousand, thousand times, refreshing both earth & sky & all the life they hold washing the wandering winds, every drop an angel of love, gladly seeking its own special work. Each [one of them][they are][A] silvery newborn stars with lake & river, garden & grove, valley & mountain. All that the

landscape holds reflected in its [their] crystal depths, a round mirror so soon to be broken, [changing from beauty to beauty at the touch of the life giving sun] & [now] after the storm is over [dead] the sky is clear & the last rolling thunder-wave [is] spent on the peaks [mountain] what has become of all the merry throng & where are the raindrops now. In winged vapor rising some are already [have] hastening back to [into] the sky [to] deepen [its lovely blue]. Some have gone into the [petals and] leaves of the plants, streaming through invisible doors into the round rooms of cells, [through][with bright painted doors/walls & windows some into the red torrents of life blood] Some are locked [up] in crystals of ice. Some in rock crystals [the pores] of [this] rock[s]. Some in moss to keep the small spring flowing. Some journeying on in the rivers [seeking new homes by the way] to join[ing] the larger [bent] [rain] drop of the ocean, [making a shining ring for the globe] [from form to form from] beauty to beauty ever changing [but] never resting [they] are speaking [resting never rushing] on with Love’s enthusiasm singing all in whatever forms [keeping pace step & time] with [all] the stars [in the sky] The [old ever new endless] eternal song of creation.