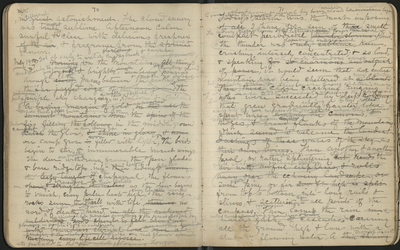 with intelligent [great] astonishment. The cloud scenery was most [truly] sublime. Afternoon calm sunful & clear with delicious freshness [of the air] & fragrance from the firs & flowers [spruce]

Got up early to watch the [glorious] day break & sunrise. [Morning] Sunbeams on the mountains. The [glorious] pale purple sky change softly to daffodil yellow & white. Everything seemed suddenly to awake, joyful & bright[ly awake] pouring through the passes [every] between the peaks & over the Yosemite domes [the far jagged edge of the horizon] made the edges burn then the silver firs in the middle ground caught the glow on the spiry tops & our camp grove filled with light.[ burning margin of gold on all the summit mountains now][spires of the] [filling the hollow] [catch][and shine in glory][now][soon] The birds begin to stir & innumerable insect wings. The deer are quietly withdrawing from the open glades & bare ridgetops into [their] leafy hiding places [among the leafy tangles of] in the chaparral, the flowers are [opening & strengthen themselves] spreading their petals as the dew begins to vanish, every pulse beats high every life cell rejoices the very rocks seem to thrill with life [there is] no word or whisper of death is heard spiritual life pervades everything & the great Godful day glowing in purple & gold is outspread like one vast flower.[in all the awakened wilderness God’s spirit is felt brooding with boundless eternal love over all making every life cell rejoice.] over everything great & small & the whole sunny day][its petals to the far white glowing horizon.]

About noon as usual big bossy mountain clouds [like mountains] began to grow above the forest & the rain [Today’s] storm was the most imposing [of all] I have yet seen of the[se] small compact periodical kind.[thunderstorms] The silvery zigzag lightning lances were longer than usual. The thunder was gloriously impressive [truly sublime], keen, crashing intensely concentrated & so loud & speaking with such tremendous energy [for so enormous an outgush of power] it would seem that an entire mountain was being shattered at every strike [a blow] but probably only the trees were being shattered many of which I have seen on my walks hereabouts strewing the ground. Clear crashing ringing notes were succeeded by deep [rolling] low tones that grew gradually echoing fainter as they rolled [like] spent waves away into the recesses of the mountains where they seemed to be welcomed home [to die]. [among the canyons & ridges & broad flanks of the mountains which seemed to welcome the loudest dashings of these waves of the sky as their own voices.] Then another & another peal or rather ringing, crashing, splintering stroke followed in quick succession perchance splitting [cut rends the air with awful emphasis & rolls away over the echoing landscape on] some pine or fir [200 feet high is split] from top to bottom into long rails & slivers & scattering them to all points of the compass. Then come[s] the rain with corresponding extravagant grandeur [& power] [in a hearty gush of cascades]. Covering [all the] ground high & low with a sheet of flowering water. A transparent [thin shinning]