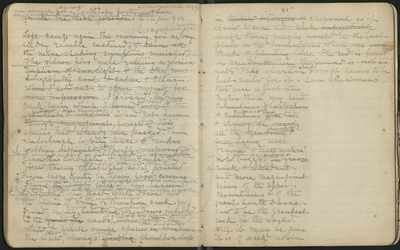 [Left camp again this morning] I left camp soon after sunrise for an [long] all day ramble eastward[& soon all the nervous shaking symptoms vanished. The silver firs were getting a glorious baptism of sunlight & the sky was delightfully cool & calm & clear. When I set out to offer myself for more impressions I] crossed the heart of Indian Creek basin [which I found full of] forested with the Abies Magnifica [finest grandest P Amabilis] I had yet seen though magnificent forests of this species had already been passed.] The underbrush is so dense it [very][makes walking difficult. It is] Mostly [composed of] ceanothus cordulatus & Manzanita. Not easily passed or penetrated [in many places] the first is thorny & grows in dense flat topped mass from being [as if] pressed down every winter by heavy snow [covering from the east side of this basin] The manzanita has exceedingly crooked stubborn [impassable] branches & so then mixed with the thorny ceanothus is often a formidable obstacle in the way of the mountaineer. I continued on past North Dome into the head of the canyon from the basin of Dome of Porcupine Creek. Here I found fine [many beautiful][lily] […rated] meadows imbedded in the [grand fir] woods, gay with [the] its companions lilium parariu[m] [both the white & small orange species in abundance. The white species is always standing shoulder deep]

in [thickets & tangles of] chaparral as if [afraid to come out. Such impenetrable rough thorny jungles would be the last place in the mountains where one would think of planting lilies. The red is found in meadows where the ground it not too wet] This elevation about 8000 ft seems to be best suited for it. Saw specimens that were a foot or two higher than my head [columbines & larkspurs & [castilerus] & grasses grow tall & showy. On nearly all the meadows hereabouts sun, being well drained & well watered, only a few are sedgy & not boggy. The grasses are rank & abundant] Had [more] magnificent views of the great South Dome said to be the grandest rock in the world. Well it may be since it is of such noble