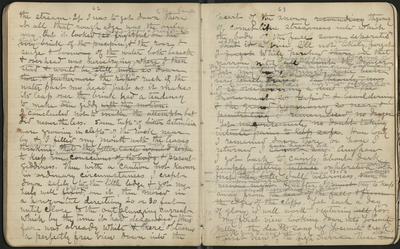 the stream. If I was to get down to the brink [there] at all that rough edge was the only way, but it looked dangerous & dreadfully steep [so frightful on the very brink of the precipice] & the roar & surge & booming of the water both beneath & overhead was nerve-trying [ where I then stood & would be still more so farther down there & furthermore the rapid] swift rush of the water past my head just as it makes its leap over the brink had a tendency to make me [one] giddy [with the motion] I therefore concluded not to venture farther [make the attempt] but I did nevertheless. Some tufts of [bitter] Artemisia were growing in clefts of the rock near by & I filled my mouth with the leaves hoping [ that thinking] they [bitter taste would serve to keep me conscious of the body and] might help to prevent giddiness. There with a caution not known in ordinary circumstances I crept down safely to the little ledge & got my heels well planted [fixed] on it, then shuffled [moved] in a horizontal direction 20 or 30 feet until close to the out-plunging current which by the time it had descended thus far was already while [and] There I obtained a perfectly free view down into the

heart of the snowy [resounding] throng of comet-like streamers into which the body of the full soon separates. [That] This is a view [I’ll] not to be forgetting [forget. I forget] While perched [there] on that narrow [niche] I was not distinctly conscious of the tremendous grandeur of the fall in form & sound & motion acting at close range smothered & in such places ones body takes keen care for safety on its own account. [ all about the danger. Yet my body must have been very tensely traced. The beauty was of so overpowering a kind & the movement so rapid & bewildering & the grand harmony so near & penetrating I remembered no danger yet unconscious no doubt taking intense keen pains to keep safe.] I remained down there or how I returned I can hardly tell [cannot say]. Anyhow I got back to camp about dark enjoying triumphant exhilaration [simply feeling intense which at][first, then later] soon followed by dull weariness, [then the nervous night][all through night a nervous mixture of wakefulness & sleep] see pgs 53 & 54 Hereafter I’ll mean [must try] to keep away from such savage extravagant nerve straining places [the dead of the falls & from the edges of the cliffs] Yet such a day X [of glory] is well worth venturing [all] for my first view of the high Sierra, my first view looking down into Yosemite Valley, the death song of Yosemite Creek, its flight over the vast cliff. These above [have]