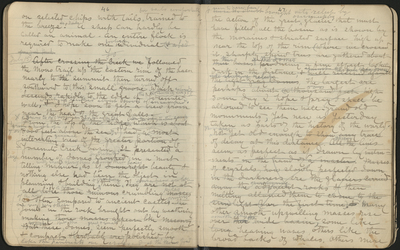 On selected chips with tails for sails comfortably trained to the breeze! [as sails] A sheep can hardly be called & animal. An entire flock is required to make one foolish individual [and a bad one at that.

July 15 [After crossing the Yosemite Creek we] Followed the Mono trail up the Eastern rim of the basin nearly to its [the] summit then turned off southward to [this] a small shallow valley [groove] which extend [descends rapidly] the edge of the Yosemite X Connect w p 55 which we reached about noon & encamped. [wall & I hope soon to get a view from near the head of the great falls. X Trans to Mt Hoffmann ex for as pg 50 [From the top of the ridge on the way to this camp which is about from a height of 7 or 8000 feet above the sea.] I had a[n] most interesting general view of the [greater portion of] Yosemite Creek basin. It presents[ed] a large number of domes distributed [grouped] in a most telling manner with sharp spirey trees around their bases as if [downright] beauty & nothing else had been the object in planning & building & grouping them. [They are not at all like those] [Only a few are like] A few [ruinous] crumbling piles [masses] of the kind so often compared to ancient castle[s] ruins. [The] One seen here & there joint in the rock brought out by weathering [making those masses appear like masonry. But these most] But the domes great & small seem perfectly smooth & compact [and probably are polished by] like the polished pavements we crossed at the Mono ford

seem to have been [were no doubt] brought into relief by the action of the great oversweeping glacier that must have filled all the basin as is shown by the Moraines & striated surface high up near the top of the rim [where we crossed it. Sharply spired treed are gathered about their bases of the domes producing a fine effect looking dark in the distance & well relieved against the light gray domes/ against this pale gray domes with striking relief. The largest are perhaps about a thousand 500 feet high. Some day I hope & pray I shall be allowed to see them well.] Grand old monuments, yet new as yesterday taken as parts of the history of the world. [They/Many are] not yet old enough to show any traces of decay at this distance. All their the lines seem as perfect as if drawn by instruments in the hand of a master Masses of crystal, how slowly perfected down in the darkness ere the glaciers carried away the overlaying rocks & then melting allowed them to come to the sunlight for the first time] Many other smooth upswelling masses rise amid the domes over the [their wide basin] some like [long] heaving waves, others like the broad backs of whales. Others mere