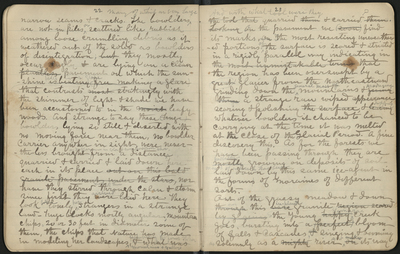 narrow seams & cracks. The bowlders [boulders], many of which are very large are not in piles or scattered like rubbish along loose crumbling debris as it weathered out of the solid as boulders of disintegration, [but] they mostly occur singly & are lying on a clean [plantless] pavement on which the sunshine falls in a glare [is beating free making a glare] that contrasts [most strikingly] with the shimmer of light & shade we have been accustomed to in the [moist] leafy woods. & strange to say these [huge] bowlders [boulders] lying so still & deserted with no moving force near them, no boulder carrier anywhere in sight, were nevertheless brought from a distance as difference in color & composition show, quarried & carried & laid down here each in its place [out on this bald granite pavement under the stars], nor have they stirred most of them through calm & storm since first they arrived [were laid here]. They look [like] lonely here strangers in a strange land. Huge blocks mostly angular, mountain chips, 20 or 30 feet in diameter some of them, the chips that nature has made in modeling her landscaped, fashioning the forms of her mountains & valleys [& what was]

And with what tool were they [the tool that] quarried [them] & carried? [them. Looking] On the pavement we [soon] find its marks, [on] The most resisting unweathered portions of the surface is scored & striated in a rigidly parallel way indicating in [the most unmistakable terms] that the region has been over-swept by a [great] glacier from the northeastward grinding down the general mass of mountains & producing [giving them] a strange rain wiped appearance scarring & polishing [the surface] & dropping [leaving] whatever boulders it chanced to be carrying at the time it was melted at the close of the Glacial Period. A fine discovery this. As for the forests we have been passing through they are probably [mostly] growing on deposits of soil most of which has been laid down by this same ice-agent in the forms of moraines of different sorts.

Out of the grassy meadow & down over [through] this ice-planed [bare] granite [region scored by glaciers] the young Tamarac [happy] Creek goes, bursting into a [perfect] bloom of falls & cascades, [&] singing & booming as solemnly as a [mighty] river as it makes [on] its way