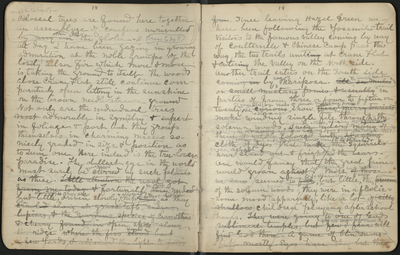 except the two [learned] pines colossal trees are found here together an assemblage of conifers unrivalled [by any other on] the globe Trans to pg 8 All day I have been gazing in growing admiration at the whole groups of the magnificent [lovely] silver fir which more & more is taking the ground to itself. The woods above Crane Flat still continue comparatively open letting in the sunshine on the brown needle-strewn ground. Not only are the individual trees [most] admirable in symmetry & superb in foliage & port, but they group themselves in charming masses so nicely graded in size & position as to seem one. Here indeed is the tree-lovers paradise. The dullest eye in the world must surely be quickened [stirred] by such trees [plants] as these. [Little attention the wool got from me today &] fortunately the sheep [they] need[ed] but little attention as they are driven slowly & allowed to nip[pering] & nibble as they like [crawled along on grass tufts, sedges, lupines & the various species of ceanothus & cherry found in the open spots along the ridge where the firs stood stand back a few yard & allowed the light to fill]

[from] Since leaving Hazel Green we have been following the Yosemite trail. Visitors to the famous valley coming by way of Coulterville & Chinese Camp pass this way, the two trails unite[ing] at Crane Flat & enter[ing] the Valley on the North side. Another trail enters on the South side [coming in] by way of Mariposa. [all an mules on small mustang ponies & usually] the tourists we saw were in parties of from three or four to fifteen or twenty mounted on mules or small mustang ponies a stranger show they made [these merry tourists make] winding single file through the solemn woods in gaudy attire, scaring the wild creatures [bears &] [& astonishing the wondering squirrels looking down from the tallest trees.] One might fancy that even the great pines would be disturbed & groan aghast] [queer riders many of them & wildly colored with flaming cloth of dyes that make the squirrels hair stand out & frightened the bears]. [One would fancy that the great pines would groan aghast at the sight of such invaders most of those we saw seemed to [feel] be & apparently but little under the influence [presence] of the solemn forests [woods], they were in a frolicsome mood (apparently) like a lot of silly shallow children at play[ing] after school hours. They were going to one of God’s sublimest temples, but did not seem to know it few I fear will find God there. A game of blindmans-bluff mostly. Eyes have they but they]