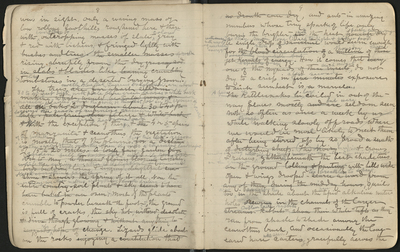 [For no] river [or snow bank] was in sight. Only a waving mass of low rolling foothills roughened here & there with brushy trees and outcropping masses of slate colored gray

& red with lichens [like] [ & fringed lightly with bushes and trees. The smaller masses of rock] rising abruptly [from the dry grassy sod in slabs & blades like leaning crumbling] like tombstones in a deserted burying ground.

The trees mostly Blue Oak (Quercus Douglassii) are about 30 to 40 feet high, with pale blue green leaves and white bark sparsely planted, where the soil is thinnest for n the crevices of rocks beyond the reach of running grassfires. are far apart seldom making what would be called groves & all are oaks - Q. douglassii [Quercus Douglasii] - about 30 to 40 ft high - pale green olive foliage & white bark & ] With the exception of these hardy handsome oak & [the] 4 or 5 species of manzanita & ceanothus the vegetation of the foothills is mostly that of the plains. I saw this hill region in the early rainy Spring months when it was a charming landscape garden [full of a happy life, especially song birds while the sunny weather is delightful and showers kept everything fresh.] [for a distance of 15 to 20 miles. A lovely fairy garden from

Feb to May. A thousand flowers blooming lavishly birds building loving & singing, delightful sun-shine [sunshine] & showers the spring of it all. ] Now the scorching weather makes everything [look] dreary [entire country -, soil plants & sky seems to have been baked in an oven.] Most of the plants crumble to powder beneath the foot, the ground is full of cracks, [the sky hot, withered, desolate & dim though glowing & without anything to suggests no hope of change.] Lizards glide about on the rocks [enjoying a constitution that]

[no drouth can dry], and ants in amazing numbers whose tiny spark of life only burns the brighter with [for] the heat fairly quivering with un quenchable energy [with energy] as they run in long lines to fight and gather food. [however dry] A single rain drop [of moisture] would seem enough for [the blood circulation of] a thousand [million] of them [these jet Kernals of energy [overboiling unquenchable sparks of life but]. How it comes that [every one of the myriads of these insects] such midgets do not dry to a crisp in a few seconds [five minutes] exposure to such sunheat is [a] marvelous.

A few [The] rattlesnakes lay [lie] coiled in out of the way places [mostly and are] but were seldom seen [not so often as once a week by us while though walking slowly off roads where we would be most likely to meet them after being stirred up by so broad a swath of disturbing sheep. The noisy] magpies & crows & ravens usually so noisy are [were] silent now [were as they] standing in the mixed flocks on the ground [gathered] beneath the best shade trees [on the ground lolling & panting] with bills [wide] open & wings drooped too breathless to speak. [scarce a word from any of them during the midday hours,] quail, also sought [too in] the shade about the few tepid alkaline water holes [occurring in the channels of the larger streams. Rabbits show their white tufts as they] Cotton tail rabbits ran from shade to shade among the

ceanothus brush, and occasionally the long-eared hare was seen cantering gracefully across the