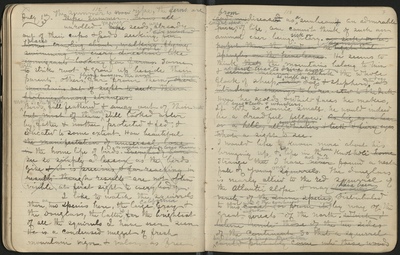 July 1st} The summer is [now] ripe, the ferns are [Ripe summer. Ferns all] unrolled. Many [ripe] seeds are already out of their cups & pods seeking their predestined places [for homes - crawling about, walking, flying swimming [ ] [ ] [ ] [ ] in every direction like immigrants looking for farms.] Some [to] will strike root & grow up beside their parents others flying away on the wind far from them, among strangers [over mountains out of sight to seek their fortunes among strangers].

Most of the young b[B]irds are full feathered & away out of their nests [but most of them] though still looked after by both father & mother, protected & fed, & educated to some extent. How beautiful [the manifestation of universal love In] the home life of birds. No wonder everybody loves them. [Everybody can see so simple a lesson as the birds give & it is precious & far reaching in results though results are not often visible at first sight to everybody.]

I love [like] to watch the squirrels there are two species here, the large California Gray & the Douglass, the latter is [far] the brightest of all the squirrels I have ever seen

from [and un]disease[d] as a sunbeam[s] an admirable little hot spark [piece] of life, one cannot think of such an animal every being sick or weary or [sick or less perfect than the wind or the light [sunshine] that spangles on the pine-leaves]. He seems to think [that] the mountains belong to him & at first tried to drive away [seemed inclined to attack] the whole flock of sheep as well as the [with dogs &] shepherd and dogs [as intruders & enemys [enemies] to be resisted to the death]

How he scolds & what faces he makes. All eyes teeth and whiskers

If not so comic small he would indeed be a dreadful fellow. [As big as a bear or a hill, all whiskers & teeth & fiery eyes,

What a sight to see.]

Strange that I have not yet [never] found a nest-full of young ones [squirrels]. The douglass is nearly allied to the red squirrel of the Atlantic slope & may have been [be only a variety of the same species] distributed to this side of the continent [coast or from it] by way of the great unbroken forests of the north [which I believe unite those of the two sides of the continent so that a squirrel [by leaping from tree to tree] could probably come into these woods]