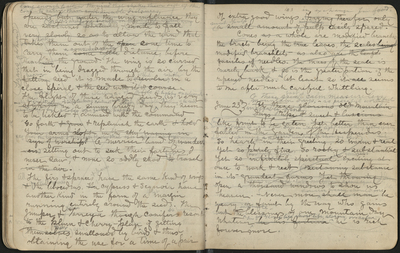 [[long enough to allow the wind that shakes the out of the cone to carry them considerable distances] [opened but under the wing influence they are sustained [Trans ahead] [long enough on their one whirling wing] [partially - made to fall very slowly so as to allow the wind that takes [shakes] them out of the open cone time to carry them a considerable [some little] distance before then reaching the ground.]] The wing is so curved that in being dragged through the air by the heavy [falling] seed it is made to whirl rapidly [revolve] in a close spiral [& the seed with it of course.]

"Go forth [& grow] & replenish the earth" [fly in the largest and merriest flocks that ever spread wing [& hold your arms aloft in the sky "waving in sign of worship." A merrier band of wanderers [adventurers] setting out to seek their fortunes, I never saw, & none so oddly shod for [to] travel in the air].

All the firs & spruces and pines have the same kind of wings [& the] [the] pines libocedrus. [The] cypress & Sequoia have another kind in the form of a flat margin running entirely around the seeds. The Juniper & Yew [Torreya though conifers] is furnishing resort to the plum & cherry-plan of getting their seeds [themselves] swallowed by birds & thus obtaining the use for a time of a pair]]

of extra good wings in exchange for food. [paying therefor only] sweet pulp [a small amount of [palatable]pulp easily spared.]

Cones [as a whole] are modified branches [the bracts being the true leaves, the scales being modified branchlets as also are the [leaf] fasicles [fascicles] of needles. The mass of the scale is merely bark, & so is the greater portion of the ripened needles.] At least so it [all] seems to me after much careful whittling.

June 23d} O these vast [great] calm measureless mountain days – so p eaceful, workful ineffably fine, exciting at once to work and rest. Days in whose light everything seems equally divine, opening a thousand windows to show us God. [[Oh these glorious old mountain days ripe & sweet & luscious like fruit to be eaten. Yet better than ever fabled in the Gardens of the Hesperides.

So hearty in their greeting, so warm & [rich] real yet so purely fine. So rocky & substantial yet so [ineffably fine] infinitely spiritual in fineness. Exciting at once to work & rest Bestowing substance in its grandest forms yet throwing open a thousand [days in whose light everything seems equally divine] windows to show us heaven.]] Never more how weary should one [shall man be weary or] faint by the way who gains [but] the infinite blessings of one mountain day

Whatever his fate, long life, short life, stormy or calm [be his fortune] he is rich forever more.