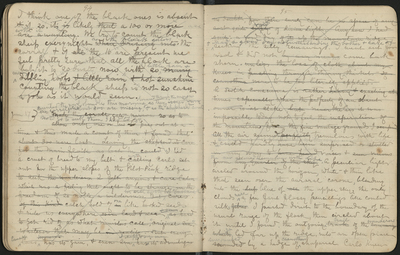 I think one of the black ones is absent [&] if so, it’s [is] likely [that] a 100 or more with it. [are awanting]. We try to count the black sheep every night as the flock enters [when driving into] the corral & if [all] "the 16" are present we feel pretty sure that all the flock are but it is so dusty now with so little rain and [many] many dibbling hoofs [& little rain & hot sunshine] counting the black sheep is not so easy a job as it would seem.

June 17} Counted the wool bundles this morning as they bounced through the narrow [issued from] the corral gate about 300 are missing and as the shepherd could not go to seek them I had to go. [[Made the corral [sic] gate narrow so as to allow only one or two to pass out at a time & thus made a count of them & found that about 300 were lost. Leaving the shepherd to care for the main flock as best he could]] I tied a crust of bread to my belt & with [calling] Carlo set out for the upper slopes of the Pilot Peak ridge [[to seek the wanderers. I felt anxious & care-laden which was a feeling that ought to be strange in the freedom of so noble a wilderness. But [in all sorts of business] cares of this kind] catch hold of one [us] like hooked seeds [& ride us everywhere over land & sea, [and seem] as hard to get rid of as what ministers call original sin, whatever that may be in reality. But every [Every] loss [however] has its gain, & even sin [I suppose may]has its advantages]]

[no doubt, for there surely can be no space of any sort quite [void] empty of diving Light. Anyhow I had quite a good day of it up the mountain ridge] & had a good day notwithstanding the bother and care of seeking the silly runaways. I went out for wool & did not [by any means] come back shorn [[unless the loss of cloth about my knees in pushing through in thorny [ceanothus] thickets of ceanothus were to be too literally applied.

A Scotch conscience is rather heavy & exacting at times especially when the property of an absent owner is at stake, but nevertheless it was impossible today not to feel the inspiration of the mountains from the fine vantage grounds I occupied All the air seemed perfectly tremulous with life [the presence of a cloud of witnesses was always enjoyed] & could hardly have been surprised or startled in any way to have heard voices & seen visions]] from any quarter of the sky. A peculiar light circled around the horizon, white & thin like that seen over the auroral corona, blending into the [deep] blue of [all] the upper sky, the only clouds were a few faint flossy pencillings [sic] like combed silk [fibres]. I pushed direct to the boundary of the usual range of the flock, then circled about it until I found the outgoing trail [track] of the wanderers [runaways which] It led far up the ridge, into an open place surrounded by a hedge of ceanothus chaparral. Carlo knew