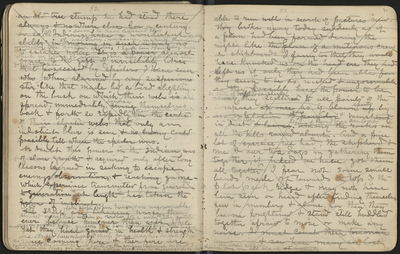 [[an old tree stump he had stood there always & nowhere else for] a century or so.] All Indians seem to have learned this [have a] wonderful way of walking unseen, making themselves invisible like certain spiders I have been observing here which in case of alarm from any suspicious stir, for example [ability in moving in such a way as to escape notice It is a power almost equal to the gift of invisibility like that possessed by spiders I have seen who when alarmed by any suspicious stir] like that made by a bird alighting on the bush on which their web is spread immediately bounce [swing] themselves back & forth so rapidly on their elastic threads [in the centre of their elastic webs that] only an indistinct blur is seen [& no enemy could possibly tell where the spider was.]

No doubt this power [in the Indian] was [of slow growth &] acquired only after long lessons learned in seeking to escape enemys [observations] & reach[ing] game - which experience transmitted from generation seems to have taken [to generation at length has taken the form of instinct.]]

[The] sheep like people are ungovernable when hungry. Almost every leaf within a ravine of a mile or two from camp except my guarded lily gardens has been devoured. Even the bushes are stripped bare as high as a sheep can reach. In spite of dogs and shepherds, they scatter to all points of the compass and vanish in dust. I fear some are lost, for one of the sixteen black ones is missing. As to be [are behaving worse than ever because hungrier than ever Yet they have gained in health & strength since coming here & therefore are]

[[able to run well in search of pastures new. They broke away today suddenly as if a plan had been formed during the night like the plan of a mutinous crew on shipboard. I fancy too that they would have knocked us on the head ere they had left us if only they had been able for they seem to be as wicked & ungovernable as they possibly have the power to behaving the poor wretches [they] are all black [at present]. In spite of dogs and shepherds [Away] They scattered to all points of the compass at once as if blown apart [up] by an explosion of[gun] powder & vanish[ing] in a whirl of dust [& leaves] Some of them I fear are lost. among the rocks on all the hills round about. And a fine lot of exercise we had, the shepherd & me & our two dogs in gathering them together, if indeed we have got them all together. I fear not. Some small bands made off towards the top of the Pilot Peak ridge & may not have been seen or heard after finding themselves few in numbers & alone for then they become frightened & stand still huddled together afraid to move or make any [noise. I must count them tomorrow morning & see how many are lost.]]