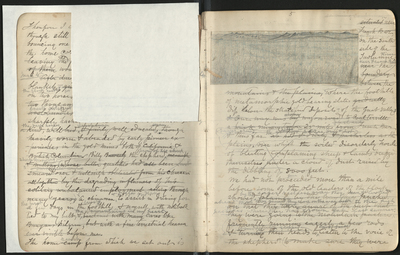 June 4th [After due]

The flock headed for

the pack horses [kind, well bred Irishman & fairly well educated, [man] though heavily worn & abraded by early pioneer experiences in the gold mines both of California & British Columbia.] Sheep-knowing Billy [Bawsely] the shepherd proud of his sheep [meanish & muttony, whose better qualities had all been [smoothed under] smeared over & well nigh obliterated from his character alltogether by the degrading influences of his solitary unbalanced employment acting through many years.] A chinaman and Digger Indian to assist in driving for the first [a] few days in the brushy foothill, & myself with notebook tied to my belt, the mountains in my heart [burdened with many cares like Bunyan's pilgrim, but with a find terrestrial heaven ever visible before me.]

The home-ranch [camp] from which we set out is

[near the boundary between the mountains & the plains,] where the foothills of metamorphic gold bearing slates [gradually] dip below the stratified deposits of the Great Valley

[& our way was [along] by wagon road to Coulterville a brisk mining town 25 miles [distant] from French Bar, Trans ahead & thus far [the hills [ ] were as dry & hot] as hot & dusty & pastureless as the plains, over which the soiled disorderly horde of bleating complaining sheep & lambs dragged themselves under a cloud of dust raised by the dibbling of 8000 feet.]

showed by the eager restless way they ran and looked ahead that they were on the way back to the high pastures where they had grown fat last summer. [plainly by the way they pushed on that they were aware of the fact that they were going to the mountain pastures frequently running eagerly a few rods & [suddenly stopping] turning their heads] to [look back] listen to the voice of [the shepherd to make sure they were]