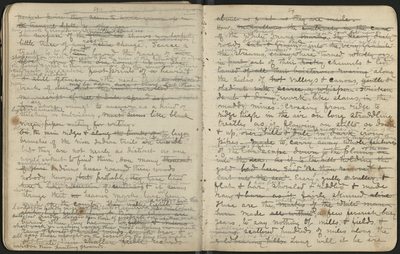 [perfect poise [with branches distributed pretty evenly all around][they seem to have grown up in the tranquil depths of the sea.] How smooth and changeless see the mountains about us.

[The surface of the ground too shows wonderfully little trace of any [recent] active change [or movement].] Scarce a track is to be found [seen], beyond the range of the [our] sheep except on small open spots on the sides of the streams or where the forest carpet is thin or awanting. On the smoothest of these open strips and hatches the [flock. Now & then one comes upon the] great suggestive footprints of [a] bears [& still oftener on] the neat sharp[ly defined] deer tracks [of deer] may be seen [here and there] but these [but the great unrolled manuscript of hill & dale spread so far has] are scarce enough to answer as a kind of light ornamental stitching or embroidery. [Most [of it] seems like blank virgin paper waiting for writing.] Along [On] the main ridges & [along the banks of] the larger branches of the river Indian trails may be traced [are traceable] but they are not nearly as distinct as one would expect to find them. How many centuries [thousands of years] Indians have roamed these woods nobody knows [but] probably [they have lived here] a great many long before Columbus touched our shores [long succession of centuries] & it seems strange that no heavier marks have not been made. Indians walk softly and hurt the landscape hardly more than the birds and squirrels. Their brush and bark huts las hardly longer than those of woodrats and the weather makes short work in washing away their most enduring monuments, all save those wrought on the forest by the fires they made to improve their hunting grounds. [on the country. They walk lightly & strike but feeble blows, & their buildings are burned when they become too filthy & Nature's rains & frosts & winter winds smooth over & obliterate their shallow feeble records]

[about as fast as they are made.]

How different those of [marvelous the contrasts in the case of] the white man[s] marks especially on the lower gold regions [The heavy dusty] Roads blasted in the solid rock and wild [cut & ground into the very granite the] streams dammed and tamed and [everywhere] turned [wholly or in part] out of their [canyon] [rocky] channels & led quietly [tamed [and led] of all their boisterous roaring] along the sides of hot valleys & canyons, [gentle & obedient with scarce a whisper – stricken dumb & doing] to work in mines like slaves [in the muddy mines]. Crossing from ridge to ridge high in the air on long straddling trestles as if flowing on stilts or down & up across valleys and hills imprisoned in [over hill & dale in dark] iron skin of the pipes [until] strike & wash away miles of the mountain’s face. [Made to carry away whole features of the landscape down to the plains [and the sea] or into the sea. As if to the hills holding the] gold had been said "Be thou removed & cast into the sea"]. Every gold gully [& valley &] flat & bar has been shoveled & riddled & made raw [& bare as if] fairly skinned [alive].

These are the white man’s marks [marks of the white man here] made [all within] in a few feverish [busy] years, to say nothing of mills [& ] fields [& towns] villages etc. scattered hundreds of miles along the flank of the range [goldbearing hills]. Long will it be ere