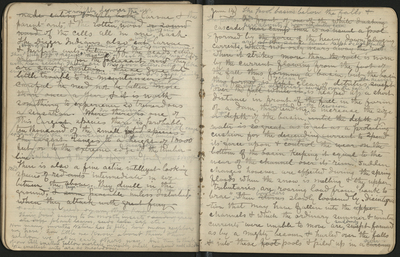 [made, eating roughly both] and roughly devour the eggs, larvae & parent ants & the rotten or sound wood [or sound wood] of the cells all in one spicy acid hash.

The Digger Indians also are fond of the [eat] larvae & even of the perfect ants so I have been told my old mountaineers. They bite off and reject the head and eat the tickly acid body with keen relish. Thus are the poor biters, bitten like every other biter big and little in the world’s great family.[- biting off the heads, eating only the bodies for the pleasant acid they are said to contain. These give but little trouble to the mountaineer. If careful he need not be bitten [oftener] more than once a year, & it is worth something to experience so tremendous a sensation. Where there is [For every] one of this largest species there is [are] probably ten thousand of the small [foetid species] foetid kind. Its range extends up the mountains nearly to the timber-line.

[The largest ranges to a height of 10000 feet, or to the extreme edge of the timberline.] [While few of the small species are found above 6000 feet.]

There is also a fine active intelligent looking red species [of red ants] intermediate in size between the above. They dwell in the ground, and build large piles of seed husks leaves straw etc over their nests [& seem peaceable unless disturbed, when they attack with great fury.] [& eat grass seeds & many other kinds as with [ ]

How many mouths Nature has to fill: how many neighbors we have; how little we know about them, & how seldom we get in each others way. And then to think of our still smaller fellow mortals invisibly small, compared with which the smallest ants are as mastodons.

June 14} The pool basins below the falls and [the pools] [In front of one of the white dashing] cascades hereabouts [have evidently been] [near camp there is as usual a pool] formed by [the force] of the heavy down plunging currents are [at the same time] kept delightfully [which not only wears away the rock where it strikes more than the rock is worn by the current flowing from the foot of the fall thus forming a basin, but the basin thus formed is kept] clean and clear of detritus. The heavier parts of the material swept over the fall [swept over the fall while it] is heaped up a short distance in front [of the fall] in the form of a dam, thus tending together with erosion to increase the size [or depth] of the basin [until the depth of water is so great as to act as a protecting cushion for the descending current to spend its force upon & control the wear on the bottom of the basin keeping it equal to the wear of the channel over its rim]. Sudden changes however are effected during the spring floods when the snow is melting & the upper tributaries are roaring loud from "bank to brae". Then boulders [stones] slowly loosened by disintegration that may have fallen into the [upper] channels & which the ordinary summer & winter currents were unable to move are suddenly swept forward as by a mighty besom & hurled over the falls